This will be the last blog post for my Sydney escapade with HTC EVO 3D, hosted by Destination New South Wales. Eunice,Willy and I hung around Darling Harbour after our Sydney Opera House Open Day tour.

It was a Sunday morning and the waterfront was bustling with activities, ranging from roadshows to various buskers, performers and mascots plying the walkways.

Willy and I were scheduled to try out jet boating with Sydney Jet. Eunice had opted out as she did not want to get wet. While the two of us were out at sea, Eunice and Duglass were sipping coffee leisurely by the waterfront.

Jet boating is one of the many activities available in a discount package if you purchase an  iVenture See Sydney Attractions Pass.

Purchasing the pass will entitles you free admission to over 40 top Sydney attractions, tours and things to do at one discounted price – ideal for travelers with limited time. You can find out more on the official iVenture website.

During my NSF days, part of my daily duties involve sea boat patrolling in a little rubber dingy. Jet boating is much the same, but at a faster speed and getting wet more. The experience brought back nostalgic memories.

Braving the cold wind blowing into my face and the icy cold seawater splashing on my exposed hands and head, I did a short video recording of my ride in the jet boat with my trusty HTC EVO 3D:

The jet boat picked up speed considerably once we were out of the harbour area and in the open sea. That’s where things got really wet and wild – I kept the HTC EVO 3D to avoid dropping it into the sea when the boat cuts a sharp turn. Hence the video recording stopped. Nonetheless, I managed to cautiously take a few photos with the phone:

After Willy and I got ourselves all wet, salty and awake from jet boating, we reassembled with Duglass and Eunice, heading off for my last fun activity before flying back to Singapore – a helicopter ride around Sydney central with Bondi Helicopters!

We arrived in a Mercedes sponsored by Hertz Car Rental to transfer to a helicopter. How’s that for traveling in style?

Here’s a 3D video recording I took with my HTC EVO, featuring a fantastic helicopter view of Sydney central:

Seeing Sydney city from the sky makes me miss it even more as I was leaving Sydney in a few hours time. Sigh.

Never mind. I will return next time, with my wife and son in toil. 🙂

After the exhilarating helicopter ride, Willy dropped Duglass, Eunice and I at the airport while he “selfishly” drove off on his own (he was headed to Wollongong again for sky diving).

Eunice and Willy had another two days in Sydney where they visited the Blue Mountains. I was headed back early as I did not want to be away from my new born son for too long.

The flight back via Singapore Airlines was comfortable and uneventful. I was lucky to have a whole row of three seats to myself, with lots of extra room to doze. I slept through most of the flight, catching on much needed sleep after six days of excitement.

This conclude my entire Sydney trip!

A final thank you to both HTC and Destination New South Wales for making this escapade possible for yours truly! 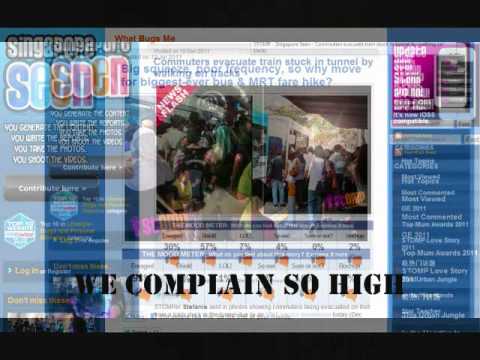 After a breakdown of the Circle Line on Thursday and the North-South line yesterday; SMRT scored a magnificent…
byalvinology