For the second half of the third day of my Sydney escapade with HTC EVO 3D, hosted by Destination New South Wales, Willy, Eunice and I rushed back to Sydney city from Bondi for the Sydney Harbour Bridge Climb.

The Sydney Harbour Bridge is a steel through arch bridge across Sydney Harbour that carries rail, vehicular, bicycle and pedestrian traffic between the Sydney central business district and the North Shore. The dramatic view of the bridge, the harbour, and the nearby Sydney Opera House is an iconic image of both Sydney and Australia. The bridge is nicknamed “The Coathanger” because of its arch-based design.

Under the directions of Dr J.J.C. Bradfield of the NSW Department of Public Works, the bridge was designed and built by English firm Dorman Long and Co Ltd of Middlesbrough, and opened in 1932. According to the Guinness World Records, it is the world’s widest long-span bridge. It is also the fifth longest spanning-arch bridge in the world, and it is the tallest steel arch bridge, measuring 134 metres (440 ft) from top to water level.

The standards of industrial safety during construction were poor by today’s standards. However, as the bridge was constructed during The Great Depression, there were many brave souls willing to take up the dangerous jobs. with not much alternatives for decent wages to feed themselves and their families. This project needed a lot of materials to be shipped in so they could finish the construction of the bridge and restaurant, for those who are planning a project similar to this, consider getting these shipping container restaurants to make sure that you have all of your supplies ready.

The Sydney Harbour Bridge Climb was started in 1998, making it possible for tourists to climb the southern half of the bridge. Tours runs throughout the day, from dawn to dask. The tour we signed up for was in the evening, just before sunset.

We did the 2hrs plus express climb versus the standard 3hrs climb. Prices are the same, with the express climb targeted at time-starved tourists like the three of us.

For the climb, we were provided with protective full body jumpsuits, head gears and other accessories appropriate for the weather conditions. There was also an orientation briefing, given by the guide who will be leading us through the climb. During the climb, we were secured to the bridge by a wire lifeline at all time. In short, safety was of utmost importance.

The last time I came to Sydney with Rachel for our honeymoon, we walked across the bridge as pedestrians and had also taken a train ride across it. This time round, I get to climb the bridge to complete my full “relationship” with the Sydney Harbour Bridge. Wonderful isn’t it?

Novelty aside, the climb itself was more tiring, yet rewarding than I had imagined. To be honest, I found the whole concept of the bridge climb to be rather cheesy and touristy. Why go climb a bridge when you can drive, take a train or just walk across it?

After experiencing the climb myself, I would encourage others to try it too if you are not deterred by the prices (~AUS$200 for adults, depending on what time of the day or the type of climb you chooses). It isn’t just the view, but really going through the climb itself that was the most rewarding. Walking along the iconic bridge while listening to the guide’s  animated narration on the bridge’s history, I felt like I was walking back in time.

After the bridge climb, we were all famished and can’t wait to dig in for dinner.

It was no wonder this was one of my best meal for this Sydney trip. I love Italian food and what I ate at Balla, I thoroughly enjoyed, right from the fresh bread served with smooth, specially Italy-imported olive oil to the salad and the side dishes, to the wood-fired T-bone steak main course.

That night, we had a pretty long dinner, chatting merrily and slowly savouring our food. This was because Eunice, Duglass and I will be parting way with Willy the next day as he head to Wollongong while we head to Hunter Valley. Stay tuned for my next post. 🙂 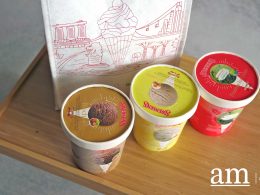 Specially for Singapore’s 56th National Day, GrabFood is collaborating with Mak-San and Swensen’s to bring you two amazing…
byalvinology ‘READY TO TRAVEL’ App by SATS – Your Mobile Travel Concierge