I would think it’s because she epitomizes the worst of the Gen Z, the generation born into a world where the Internet already existed.

The whole Adelyn Hosehbo saga is documented on this forum thread in EDMW. If you are too lazy to read through the hundreds of postings, Adelyn allegedly slapped her mum for nagging at her and also stole from her to buy a LV wallet. Being a Gen Z, she has to bring these deeds to the next level by boasting about them on Facebook to the world:

Other Gen Z, including both Adelyn’s friends and strangers, came out to support her actions after the saga hits the news stand. Apparently, slapping your own mum is not a big deal to these kids, with some even boasting to have done the same: 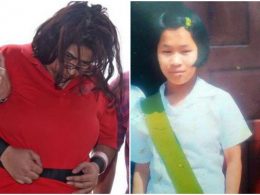 Gaiyathiri Murugayan, the 41-year-old cop’s wife who tortured Piang Ngaih Don to death extensively over the period of…
byDanielle Ann

So, it seems the Singapore Armed Forces are on a competition to see who can produce the best…
byalvinology
Power up your child's learning with Geniebook.
Sign up for free demo
This is default text for notification bar
Learn more