Remember the Maserati driver who allegedly fled the scene of his crime and left a traffic policeman severely injured in the road? A Maserati hit-and-run driver Lee Cheng Yan recently went up to court for ten different charges, and his defense for all the crimes related to the serious injury of the traffic policeman will allegedly be, “It wasn’t me.”

Who is Lee Cheng Yan? Read about the Maserati driver who said he did not drag a police officer 100m down the road here.

In a report from TODAY, the 35-year-old accused of dragging traffic officer Khairulanwar Abd Kahar 100 meters at top speed said that he wasn’t the driver of the vehicle when the crime happened. The report said that Lee Cheng Yan disputed the prosecution’s claim that he was the driver of the ultra luxury car that figured in the case in November 2017 along Bedok Reservoir Road.

Prosecution says the defense has no merit

The same report said that Deputy Public Prosecutor Timeotheus Koh has several kinds of evidence that support their allegation.

“It is contrary to the totality of the evidence which the prosecution will adduce at trial, including objective video footages of the incident, independent eyewitness accounts and the testimony of the accused’s friends to whom he spoke to on the day of the incident and admitted to his involvement in the offences,” said the DPP in the TODAY report.

Read about Yan Han, the man who took down the Maserati hit-and-run driver.

Here is what reportedly happened during the hit-and-run crime that was allegedly perpetrated by Lee Cheng Yan.

The prosecution started with how the accused allegedly left his home on November 17, 2017 driving his own Maserati. He was on the way to Bedok Reservoir Road to pick up a laptop. According to the prosecution, Lee Cheng Yan had a driving ban, but still went out behind the wheel of a car.

He picked up the laptop and was back along Bedok Reservoir Road when he was flagged down by traffic enforcer Khairulanwar Abd Kahar for not wearing a seat-belt. The accused didn’t stop until he was forced to by a traffic junction. The traffic enforcer then parked his motorcycle in front of the Maserati and went to the driver’s window.

The accused was instructed to pull over to the side after he rolled down his window. But instead of complying, the driver then backed up violently and sped up to escape the traffic police encounter. This caused the policeman’s shirt to get entangled with the Maserati’s door.

The prosecution claimed that the accused was fully aware of the hurt he could inflict on the policeman when he drove so recklessly, and that when the enforcer was able to get free of the car, the accused did not stop to help and fled.

If Lee Cheng Yan didn’t drag the police officer, then why did his father apologize?

Witnesses and friends of the accused testify

Several witnesses said that they saw the incident happen, and a motorcycle rider pursued the Maserati while a pillion rider took a video. The Maserati was able to throw off the motorcyclist, though, and had left his Maserati eventually at along Willow Avenue near Upper Aljunied Road.

The prosecution said that Lee Cheng Yan asked one of his friends to pick him up and to be transported to the home of another friend, where he related the incident. He also threw out the white shirt he was wearing.

The friends of the accused were all part of the prosecutions witnesses.

Victim could not identify him, though

But when the victim was asked to testify, the policeman could not positively identify the accused as the man who was driving, perhaps due to his shock at the incident and the accompanying trauma.

Another witness testified that he did see the driver of the Maserati, but did not remember his face. He did testify that the driver had a white shirt on, though.

There are a total of 59 charges brought up against Lee Cheng Yan that include gambling, illegal business dealings and crimes of other natures, but these will be heard at another time.

The third edition of #BuySingLit movement to promote Singapore literature promises to be its biggest yet, with the…
byIrone Kim 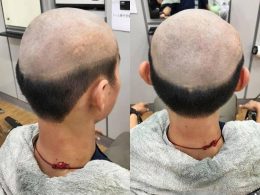 Mom has got to do what mom’s got to do in the time of COVID-19. A mother in…
byDanielle Ann

Mother’s Day F&B Deals on Takeaway and Delivery you don’t want to miss!

Mother’s Day is around the corner! Even though you might not be able to celebrate the occasion in…
byIrone Kim