Isn’t it interesting that Facebook posts can become headline news these days in the mainstream media in Singapore?

I am very intrigued with the ongoing development between Dr Lee Wei Ling, the daughter of the late founding prime minister of Singapore, Lee Kuan Yew, and various editors from Singapore Press Holding (SPH), my previous employer and the largest media company in Singapore.

What’s the story so far?

It all started when Dr Lee wrote a post on her Facebook criticising the hero-worship surrounding her father’s death anniversary. She claimed to have published it on Facebook because the Straits Times refused to publish the article.

The Straits Times’ Assistant Sports Editor, Chia Han Keong, retorted her with a Facebook post saying that Dr Lee should be glad that “we don’t spit on your dad’s grave.”

Chia added: “Yah yah yah, one little chiding by the daughter, and now everyone regrets remembering LKY. Too late, mofos.”

Dr Lee got a huge wave of support from many people online for her post on the excessive hero-worshipping of her late father. Probably encouraged by the hugely favourable responses, she went on a tirade, starting with another post stating that she was denied freedom of speech and won’t be contributing pieces to SPH anymore.

This was followed by another post which claimed her father did not suppress freedom of speech (*ahem*). She brought in Janadas Devan into the saga. Devan is currently the Chief of Government Communications in Singapore and used to work at the Straits Times whereby he edited Dr Lee’s stories, including her published book.

Devan was not happy with what Dr Lee wrote about him and issued his own rebuttal. A war of words ensued and the saga is still ongoing.

To cut a long story short, the elites in Singapore are quarrelling publicly online and we, the peasants, get to grab our popcorns and enjoy the show, thanks to the digital revolution. With tools like blogs and Facebook, anyone can be a publisher and it democratise the news publishing process.

It’s just like the quarrel between the two Singapore bloggers over a ‘missing’ seat at a wedding banquet that was spilled open online for the public to witness. In the past, the spate would probably had transpired behind closed doors, but now we get to enjoy the show.

No longer is the mainstream media like SPH and Mediacorp, the sole purveyors of news and truth. Anyone with an internet access can do it now. That was what Dr Lee did when she chose to publish her post onto her Facebook account when she couldn’t get it published in the Straits Times.

In the end, it all boils down to freedom of speech.

Why should we support Dr Lee Wei Ling?

If it was someone like say Dr Chee Soon Juan complaining that SPH won’t publish his commentary pieces, do you think anyone give two hoots about it?

Many detractors commented that Dr Lee’s father was the one responsible for curbing free speech in Singapore and that her brother, the current prime minister, continues to uphold the practice with the current government. As such, it is pure hypocrisy for Dr Lee to cry foul over censorship.

This is guilty by family association. If we were to buy the argument, we are no better than communist China during the Cultural Revolution where people get persecuted because of what their parents or relatives did or allegedly did.

I am a fan of Dr Lee’s commentary pieces. She is blunt and say it like it is. Such raw, candid honesty is rare in Singapore due to the climate of fear when it comes to writing. Granted she has an untouchable status as the daughter of  the late strongman, Lee Kuan Yew, she could have chosen not to express any opinions and keep out of the public eyes like her other brother, Lee Hsien Yang. She didn’t and continue to be vocal on things she believe in.

I hope Dr Lee will continue to write and share more articles on her Facebook profile. I certainly hope she continues to advocate for free speech in Singapore. It will be interesting to read what her unedited, uncensored writings are like – whether they will be like ‘sailing through a fog’, as claimed by Devan. 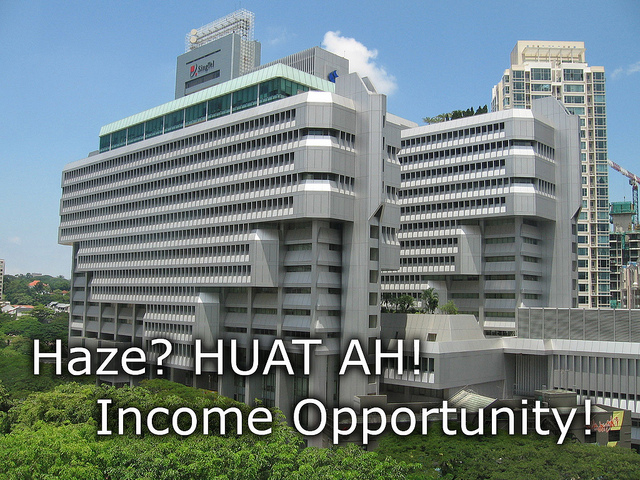 Top 5 Winners and Losers from the Haze

The Taiwan bubble tea craze is back in Singapore! Another Taiwanese bubble tea chain, Come Buy has entered…
byalvinology