Loo Boon Chong, one of the seven accused in the gruesome Orchard Tower murder case in 2019 has been sentenced to five months in prison. According to The Straits Times, the 27-year-old Loo had disposed of a bloody garment allegedly worn by Tan Seng Yang, who killed the victim.

The same report said that Loo had a separate gambling offense, and was fined $,1000.

The only woman in the Orchard Tower murder case, Natalie Siow Yu Zhen, has been sentenced.

Who is Loo Boon Chong?

Loo Boon Chong pleaded guilty on December 14 to discarding a blood-stained white shirt that belonged to the alleged killer in the Orchard Tower murder case. The victim, Noel Satheesh Gobidass, was stabbed with a karambit knife that was allegedly seen in the possession of Tan Seng Yang earlier on the day of the crime, July 2, 2019.

What is a karambit knife and what is its relevance to the Orchard Tower murder case?

Loo officially pleaded guilty to one charge of intentionally obstructing the course of justice. The shirt he discarded was allegedly important to the investigations figuring Tan.

Tan allegedly had the knife with him in the early hours of July 2, 2019, and had showed it off at various clubs.

Loo and five other accused in the case have had their cases downgraded and resolved. Tan is the only accused who has not had the murder charge downgraded.

According to a report by Yahoo News, Loo had known Tan for three years, and was out with him on July 2 bar hopping. Loo was only aware that Tan had previous issues with the police but was unaware of the details.

What happened to Tan Seng Yang and Loo Boon Chong?

According to previous reports, Loo and Tan had been with drinking with other individuals accused in the case in the Orchard area. Tan was known as “Ah Boy” in that area. When they reached the Naughty Girl Club, Tan, Loo, and other people involved in the case clashed with another group. Tan had brandished a knife and injured some of the other party and a security guard. Loo attempted to stop the fight when he saw that Tan had taken out the knife.

After leaving the Naughty Girl Club, the group that included Loo, Tan, Natalie Siow Yu Zhen, and other accused encountered the victim, Noel Satheesh Gobidass. The latter confronted the group over the earlier conflict and the former group piled on the victim.

Investigations showed that Loo did not join in the violence Tan’s group inflicted on Gobidass. Tan allegedly inflicted a fatal injury to the victim’s head and neck, while others kicked him.

As the group was leaving, Loo had seen the victim become critically injured, eventually collapsing at the entrance of the mall.

Read the blow-by-blow of the Orchard Tower murder case here.

According to the same report from The Straits Times, Tan accompanies Loo to the latter’s home, and took a shower. Loo then gave the man a new shirt, $50 and a new shirt. The white, bloodstained shirt that Tan shed was eventually thrown in a communal rubbish chute and never found.

Loo was remorseful over disposing the shirt, according to his lawyers. The same lawyers said that Loo was unable to pay the $1,000 fine and that his jail sentence should be extended by five days instead. 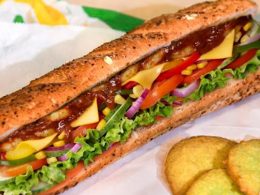 Subway is introducing the all-new Shrimp to its menu in Singapore, making it the first Subway restaurant in…
byIrone Kim Find new jobs and available gigs in Singapore in a jiffy with FastCo’s new FastGig app!

FastCo, the company behind FastJobs, Asia’s top non-executive job portal for both jobseekers and employers, today announced the…
byIrone Kim