Natalie Siow Yu Zhen, the lone woman charged in the Orchard Towers murder case that occurred in the last quarter of 2019, flipped a table during the altercation which saw the death of victim Noel Satheesh Gobidass, said a report from TODAY Online.

In a hearing that resulted in jail time for two of the other accused in the case, the full events of the violence and how it all started was presented to the court.

The 43-year-old victim, Gobidass, died from a puncture wound on the neck which bled out produsely as he lay unmoving at the entrance to Orchard Towers. He was dead before emergency responders were able to get him to Tan Tock Seng Hospital.

Who is Natalie Siow Yu Zhen? Gang member or influencer?

What did Natalie Siow Yu Zhen do in the Orchard Towers murder case?

According to the same report, the sole man charged with murder in the case, 28-year-old Tan Sen Yang, had a karambit knife with him hours before the violence erupted between the suspects and the victim.

The knife-carrying Yang was at Naughty Girl club earlier that day on July 1. The group started to assemble that night, with two of the accused starting at Club Mao at Oriental Plaza in Chinatown.

Natalie Siow Yu Zhen then joined the group at 1:00 in the morning. The group then transferred to Club Peaches in the Orchard area. Their group added more members there.

Tan Sen Yang met up with Natalie and the other accused three hours later when they club hopped to Club Aura at Orchard Hotel.

They then decided to walk back to Naughty Girl Club–at which point there were 10 people out together. They ordered two towers of beer.

It all goes down

The merrymaking ended at 6:20 in the morning, and just as NAtalie, Yang, and the rest of the group left the estabishment, they encountered a group of five people that apparently were significant enough to them to warrant a pause.

Tan Sen Yang had a tense, violence-charged exchange with the newcomers, and the report said, “

Security officers from the club tried to calm the groups down, and while this was happening, the victim, Noel Satheesh Gobidass arrived at the entrance of the club.

Natalie is going to trial for one charge–but sets up an online shop first.

Tan Sen Yang then waved his karambit knife above his head (as caught on CCTV footage). He swung the knife in a wide arc at everyone gathered at the entrance. He got a security officer and another man injured.

The prosecutor handling the case added that Natalie ran towards the violent encounter and jumped in.

“She also flipped a table positioned near the club entrance onto the floor,” Deputy Public Prosecutor Ang Feng Qian said.

How did the victim die?

The account recorded in court continued to say that when someone shouted “Police!” the group dispersed and ran to the elevator to get to the ORchard Towers ground floor.

It was there that Natalie and Tan Sen Yang’s group encountered Gobidass, who came down an escalator alone and confronted one of the suspects.

Another violent altercation happened, with the male accused brawling with Gobidass and Natalie joining in as well.

This was where Tan Sen Yang swung the karambit knife and slashed the victim repeatedly. They left him bleeding.

Alvinology previously reported that Natalie is now an influencer after she was released from custody. Qatar Airways’ popular Travel Festival is back and has been significantly enhanced for 2017, inviting travellers to take…
byalvinology Australia Adventures: Here are the New Attractions, Events and Eats for your next Australia Visit

Diverse experiences of art, culture, culinary delights, and thrilling adventures await in Australia. Here is a roundup of…
byIrone Kim 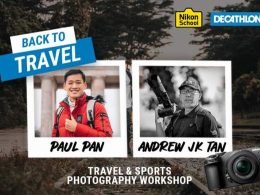 Sharpen your Photography Skills at Decathlon’s “FREE” Back To Travel Nikon Photography Workshop – sign up today!