Terence Siow Kai Yuan, National University of Singapore molester who did not get jail time thanks to good grades and a supportive family wrote an apology letter to his 28-year-old victim earlier this year, but he never sent it to her.

Instead, it was used as evidence to mitigate his case and get concessions and reduced punishments despite the verdict. He didn’t send it to the victim, but it ended up in the hands of the media. Shin Min Daily News published it, of course, but that was literally the only way that the victim got to read the letter.

Victim didn’t even get the letter from Terence Siow

According to a report on The New Paper, the letter written by 23-year-old Terence was sent to Shin Min Daily News, and the media outlet sent the letter to the victim through WhatsApp messenger.

The victim posted on her Facebook profile that she never received or read such a letter from Terence personally, and was surprised that it actually existed. She did not read the letter that Shin Min sent to her messenger account.

“I think it’s strange that a handwritten letter that was supposedly meant for me did not reach me, but instead got to Shin Min first,” she said in a report.

What was in the letter?

According to a photo of the letter that Shin Min showed online, Terence said that he was deeply remorseful for his actions, especially after he reflected for a short time.

He mentioned that he also has been punished by the NUS, and that he had been suspended. The letter did not specify how long his suspension was. He also said in the letter that he was undergoing counselling and getting psychiatric treatment.

He ended the letter by asking the victim to give him a chance to correct himself and become a good addition to society. 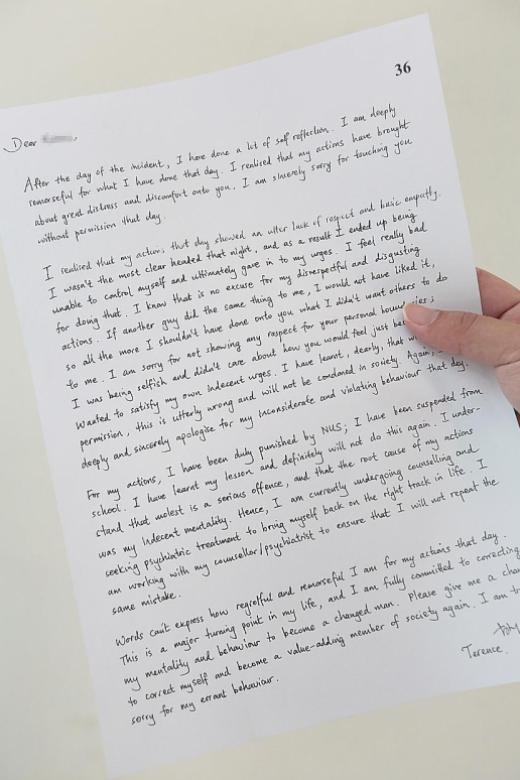 What did Terence Siow do to the victim?

A previous report on Alvinology showed that the NUS molester touched the victim several times while on a train ride, evne going so far as to follow her even when she alighted the train at Serangoon MRT station. He quickly went up the same escalator she was using and touched the seam of her shorts above her private area, at which point the victim began shouting at him and went to the station controller to file a report.

Terence recently received a sentence of 21 months’ probation, a period of community service, and counselling. Thanks to mitigation done by his lawyers and family in court, he was not given jail time. The victim was also offered $5000 in bond to ensure that Terence would not re-offend, but she refused, as this would allow his sentence to be reduced.

Netizens have expressed outrage over the verdict and the fact that Terence’s good academic standing and family were able to get a light sentence despite his persistent molestation even when the victim had escaped the train. A petition is online to appeal the case, and the AGC have also started the appeal process.

How did NUS molester Terence Siow get such a light sentence?

A 71-year old man in Bandung modified and combined two Toyota Vios in an unusual, yet creative way.…
byIrone Kim

Who was the hero who smashed SMRT train window yesterday during the breakdown?

Was it an Alien? Or was it an Angry Bird? Or was it the Incredible Hulk? Answer: It…
byalvinology 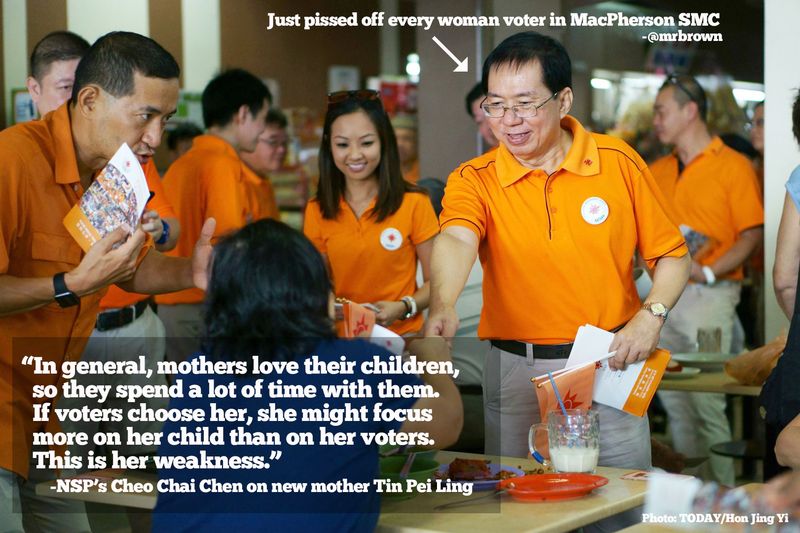