Singaporean blogger queen Xiaxue recently posted translated screenshots of the private conversations between local actors Carrie Wong and Ian Fang, which have a distinct sexual undertone, and have even mentioned the late actor Aloysius Pang and other co-stars.

In a report by AsiaOne, the two actors have confirmed that the circulating texts in Chinese on their Instagram messenger accounts are genuine, and have apologized for the scandal. Blogger Xiaxue helpfully posted the screenshots on her Instagram stories, along with her translations for her non-Chinese-speaking followers as best she could.

She complained that the video showing the texts wasn’t clear enough, but she was able to capture some of the sentiments between Carrie Wong and Ian Fang.

The first text is almost innocuous, as the exchange could simply be between close friends, no matter the gender. Ian asked if Carrie is pretending to be cute, and even asked her if she missed him.

One screenshot alludes to the secretive nature of their exchange, as Carrie says that Ian does not miss her openly and only does so in his heart.

Aside from the increasingly-intimate nature of the texts, Carrie also shaded Lawrence Ong, who had taken the late Aloysius Pang’s place in the Channel 8 drama, My One In A Million. Here, Carrie asks how Lawrence could deserve the part and how the latter could compete with Aloysius.

She questioned Lawrence’s popularity in China and said that if he is truly a popular actor, he would not have to go back to Singapore to work. Ian says that Carrie can “win” him, but we aren’t sure what eactly Ian means by that, and Carrie seems to share the same bewilderment.

Another one screenshot could explain Ian’s sentiment, where he advises Carrie to make sure Lawrence knows that the latter cannot rest on his looks, connections or luck. Could this be Ian saying that Carrie and he are so immensely talented that take away their looks, connections, and luck, they would still be celebrities?

Xiaxue also choice to highlight the fact that Carrie had previously said publicly that she was excited to work with Lawrence. Could Carrie have changed her mind after working with Lawrence a second time or were her true sentiments found in the illicit texts?

There could be an explicit mention of the Ian’s desire to have intimate relations with Carrie. It’s unclear if they had previous intimacies or this would be the first time that they would engage in such. He did pedal back and asked for a tame kiss.

Another text could confirm that they have slept together and that they plan to in the future.

Carrie and Ian apologize for the texts

While no one was surprised that the texts were genuine or that the two are sorry for their private interactions, people previously thought that the two were dating other people. According to AsiaOne, Carrie had gone with Boris Lin on Valentine’s Day, but had taken down the Instagram post that showed the two of them. Ian, on the other hand, was rumored to be dating actress Rebecca Lim.

Carrie has since issued this apology, “I deeply regret the unnecessary inconvenience and hurt caused by the coarse language in our private texts. I have been constantly reflecting on the incident and will take responsibility for my inappropriate language. I am grateful to my boyfriend for his trust and I would like to apologise to everyone.”

Ian has also issued a statement that said, “Carrie and I are good friends who talk about everything. I admit that the language used was crass and inappropriate, and I am sorry for that. I would also like to apologise to those who have seen the messages. As a public figure, I will be more mindful of my actions from now on.”

Read about the CantoPop Queen Sammi Cheng and her husband Andy Hui, who could have leaked the latter kissing another woman in a car, caught on camera! 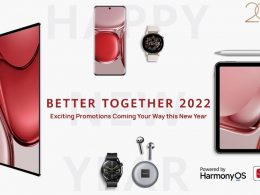 To celebrate the New Year, Huawei will be marking down its range of devices with up to 35%…
byIrone Kim If there is one brand that has popularised German food in Singapore, it must be Brotzeit. Despite having…
byStaff Writer

Only in Singapore, would local-born citizens fear job discrimination in our own homeland, even in the least expected…
byalvinology