As investigations are ongoing into the body of a newborn girl found in a recycling center in Taiwan, the suspects in the case can no longer be contacted, according to the young Singaporeans’ parents.

In a report by The New Paper, Taiwanese authorities have matched the baby’s DNA to samples found in the Singaporean couple’s hotel room, as well as a piece of placenta in the Ximending hotel’s pipes.

An autopsy has also been conducted on the baby, and officials are now determining whether they baby died before birth or after being born which could tip the balance towards the case being put together against the suspects.

Read about how the baby was dumped in a restaurant rubbish bin in Taiwan here.

According to initial reports, the suspected couple and their parents were contacted as authorities began to investigate the matter. At first, the parents of the young man suspected to have actually thrown the child into the rubbish bin had said that they had spoken to their son. They said that the 26-year-old man had indeed gone to Taiwan on the dates the suspects were there, but that his girlfriend did not appear pregnant.

The man’s parents said that she was “always round,” and so they were unable to say whether she was carrying a child or not.

The woman, who was interviewed by media was also able to say that she was not involved in the case despite being a suspect, as she said that she would not have been able to board a flight if she was pregnant. She denies being pregnant.

Media who reached out to the man also said that he confirmed he was in Taiwan with his girlfriend on the said dates, but that she was not pregnant and they did not leave the hotel on February 26, the date that the baby was dumped in the garbage.

However, as reports continue to come out based on investigations, the parents of both the man and woman involved in the case said the two cannot be contacted, and have not even returned from their trip.

Read about what the young suspect said when the media asked him if he dumped his own daughter.

What’s next for the case?

According to Taiwanese reports, the cause and time of death of the baby are being determined, as it depends on the circumstances of the case. Reports said that the charges could be different based on whether the baby died before being delivered or after she was born.

The baby was found in a black garbage bag with the placenta and umbilical cord intact.

Central News Agency reported that if the baby had died before birth, the suspects could be charged with abandoning a corpse. But if she died after birth, they could be looking at additional charges of homicide and causing death by negligence.

Taiwanese authorities have not contacted Singaporean officials for assistance as of the moment since they are still investigating matters on their side. Taiwan and Singapore currently have no extradition treaty.

Can the couple be charged in Singapore?

Reports said that some offences can be leveled against the couple in Singapore and that they may be compelled to provide blood and DNA samples to help in the investigation.

What do you think of how this case is unfolding? Let us know in the comments! What crosses your mind when you think of tropical paradise – Hawaii? In Singapore, Aloha Poké is easily…
byCarrie Er 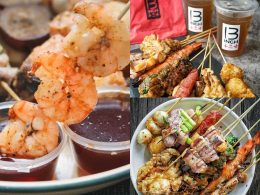 East or West, which side is the best? This never-ending friendly rivalry in Singapore won’t see a conclusion…
byZenn