There are guys like Ashyr Owyong Min who have an endless supply of girls (and a guy) as potential girlfriends, flings and reltiaonships–and then there’s this guy who can’t seem to keep any one of his dates interested.

To top it all off, he also makes sure that they never ever want to see or talk to him again (unless it’s in a court of law).

Meet Wenhui Tan a.k.a. Nowe, who’s been active on the dating scene for quite some time–but has also been reported for alleged harassment and abuse!

How bad is this guy?

In a Facebook post by user Melody Yap, she warned other girls who used popular dating app Tinder about a guy that her friend had matched and dated once. According to Melody, her friend and Wenhui went on a date but the girl didn’t want to go on a second one.

Ladies who are on Tinder or any dating apps, please be warned of this psychotic creep named Wenhui Tan. Sometimes, he goes by the alias Nowe.

My girlfriend matched with him on Tinder & they went for one lunch date on 30 Dec 2017, after which my girlfriend rejected him in a civil manner on Whatsapp (the first few screenshots).

He couldn’t deal with the rejection & he went all apeshit on her, started insulting her & her family, and even threatened to go to her workplace (she’s a teacher) to “lodge a complaint” against her. My girlfriend blocked him on Whatsapp subsequently but he turned to SMS & continued sending nasty text messages.

A police report has been made against him, with their Whatsapp conversation submitted as an evidence of harassment. While the police aren’t taking actions at the moment, what concerned me is that my girlfriend isn’t the only victim. After I shared this incident on my Instagram, to my horror, so many girls came forward & called him out—each sharing their experiences with him. They were mostly similar: that he couldn’t handle the rejection & started insulting + threatening women.

I want all of you—men & women alike—to know that no one needs to cower to such bullying. To all the women & girls out there, we live in a world with equality. We are in no way less superior just because we are born females.

Men may view women as sexual objects but we have our pride & we deserve respect no less as a person. Not all men are like that, though. Believe that there are good men out there & if one man doesn’t appreciate you, move on. Do not settle.

Do not let men insult & degrade you the way Wenhui did to all these poor girls. We are NOT supposed to feel low nor are we commodities for men to discuss, play with & rid of. We have to protect ourselves & be strong. Stand up & speak up against such douchebags. Do not suffer in silence.

I am sharing his Facebook profile, together with all the recounts from different women. Wenhui’s/ Nowe’s doing cannot be tolerated & there should never be another victim on Tinder/ any other dating apps.

Please share this post so that women (and men, in case he is bi) are warned of him. He stays in Mayflower Crescent.

Once she let him down through WhatsApp, he started to demand answers as to why he was being rejected. When her answer proved unsatisfactory, he began to demand more answers and started to say very negative things. After she said that him and her were not suitable, the conversation went downhill from there. When she began to reject him more forcefully, he started to say that she was entitled and that she probably treated all guys as such. He then said that he would find her workplace and lodge a complaint against her. He was able to find out that she was a teacher. He also made a lot of other threats. And from there it steadily got worse thanks to his spamming verbal abuse and harassment. She eventually blocked him on WhatsApp but enterprising Wenhui was not done. He managed to message her though direct SMS, and it was the worst bunch of messages out of all he’s ever sent the girl. We get that rejection sucks, but to involve her whole family?

Other women had gotten in touch with Melody and her friend and were able to confirm that they had the same experience with Wenhui. They would get a match on Tinder, OKCupid or other dating platforms and then would agree to meet.

But when things did not work out and they would decline to go on further dates (or even ignore him because they were so creeped out), he would harass them through text and chat.

As of posting, Melody said that a police report has been filed against him. She encouraged other women to speak out and to be wary and vigilant over this man if they ever encounter him on dating sites or in real life.

Not the first and the creepiest time

According to other girls who spoke to Melody’s friend, he did not always use dating apps or websites to et girls. One time, a girl said he allegedly approached her after her shift at work and asked to photograph her feet for a charity organisation.

She relented, but found the experience extremely disturbing when he began to caress the sole of her feet and ask inappropriate questions.

He has used this excuse to talk to girls before, and someone even called to attention this post made more than a year ago, featuring Wenhui.

What do you think of this guy? Does he have the right to talk to these women as he did after they rejected him? Let us know in the comments!

Read about a completely different guy who had 4 girlfriends and a boyfriend at the same time. 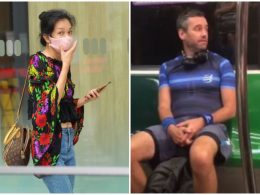 Coffee can be a piece of art! This is especially so in the hands of Michael Breach (@Baristart),…
byalvinology