The airline is real and it is a good airline, first making it’s entrance into Changi Airport in Singapore back in 2014. Check out our review.

The low cost carrier is a full member of the International Air Transportation Association (IATA) and certified by the IATA Operational Safety Audit (IOSA).

The bikini girls from Vietjet serves balloons too and are now being featured in hot air balloons at the Albuquerque International Balloon Fiesta in the United States, the largest balloon festival in the world. Vietjet’s balloon, which is 25 meters high and 18 meters wide, can cover a large distance and reach a maximum height of nearly 1,000 meters. It will be showcased to visitors from 7 to 9 October, 2017. This is the first year Vietjet’s bikini models are participating in the the balloon festival, turning up the heat several notches. Festival visitors will have the opportunity to watch the Vietjet balloon lift into the panoramic sky view of Albuquerque while meeting the airline’s friendly bikini clad models.

Launched in 2016, Vietjet balloon has participated in a series of major festivals in Vietnam and around the world. At the 2016 Hue Festival, the Vietjet balloon was the only representative of Vietnam to participate in the 2016 International Hot Air Balloon Festival with balloons from eight other countries, including UK, Netherlands, India, Japan, Korea, Thailand, Malaysia and the Philippines. In August of the same year, the balloon made its first overseas appearance at Taiwan’s largest hot air balloon festival, Luye Gaotai, in Taitung City.

Vietjet balloon continues to be the only representative from Vietnam to participate in the ninth “My Balloon Fiesta” in Kuala Lumpur, Malaysia with 18 participants from 11 different countries in March 2017.

After the United States, the Vietjet balloon will travel to its next destination in Japan in November 2017. First held in 1972, the Albuquerque International Balloon Fiesta is an annual festival of hot air balloons that takes place every October in Albuquerque, New Mexico, USA.  The 46th fiesta has attracted more than 550 balloons and nearly 1,000 pilots worldwide. This year’s event also features around 94 unique balloon designs from 22 countries including the United States, Britain, the Netherlands, Belgium, Brazil, the Czech Republic and Japan.

Samsung Galaxy Note20 series is here and an ultimate productivity powerhouse – the most powerful Note Series yet! Pre-order today! 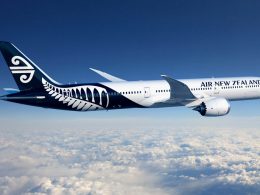 Air New Zealand announces the resumption of direct flights from Singapore to Auckland on 27 March. Together with…
byIrone Kim