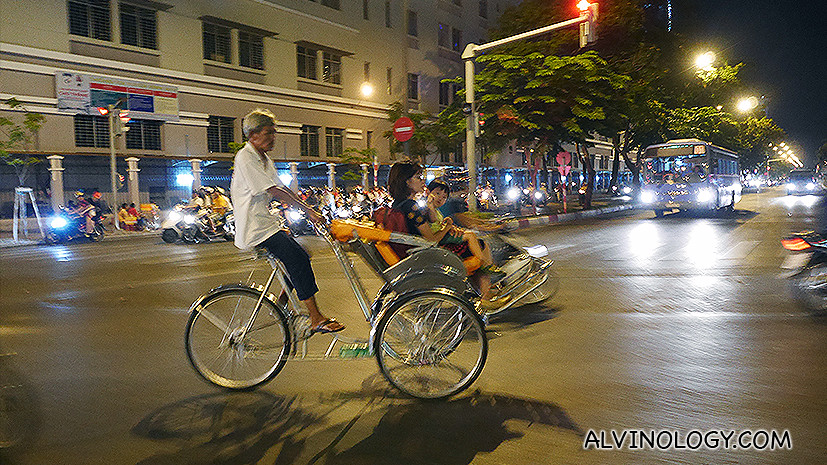 If you are traveling with a young kid to Ho Chi Minh City (HCMC), Vietnam, what are some kids friendly activities and attractions available?

Here are ten kids friendly things to do in HCMC, based on my family trip there recently with my wife, Rachel and three year old son, Asher.

A Banh Mi is a vietnamese sandwich, combining ingredients from the French (baguettes, pâté, and mayonnaise) with native Vietnamese ingredients, such as cilantro, cucumber, jalapeño, and pickled carrots and daikon. 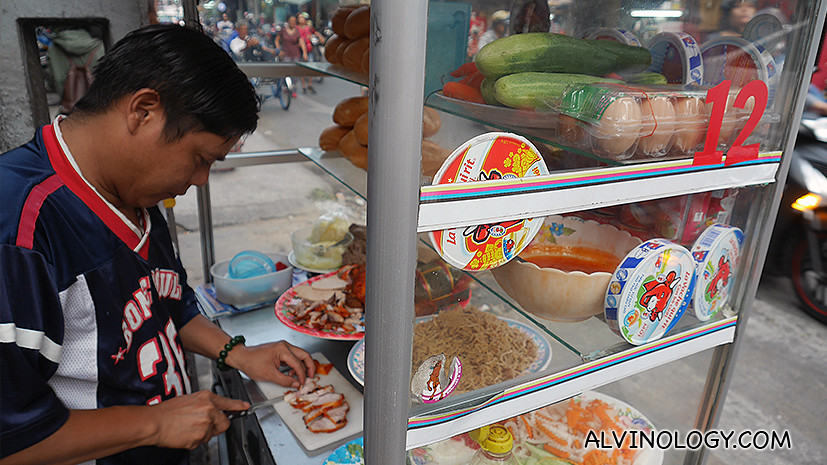 The classic version, bánh mì thịt nguội, sometimes known as bánh mì đặc biệt or “special combo”, is made with various Vietnamese cold cuts, such as sliced pork or pork bellies, chả lụa (pork sausage), and head cheese, along with the liver pâté and vegetables like carrot or cucumbers.

You can get this in vietnamese restaurants in Singapore too, but nothing is more authentic than to enjoy a Banh Mi in the country of origin.

This is my favourite snack in Vietnam and I am glad Rachel and Asher enjoy it just as much!

Enjoy a boat ride along the Mekong River

We did this via a full-day “My Tho Ben Tre The Upper Mekong River” tour, booked with TNK Travel.

We first took a leisurely boat trip in My Tho, around the four beautiful islands known as Dragon, Unicorn, Phoenix and Tortoise islands. This was followed by a row boat ride in the shadows of the water-coconut palms along the tiny canals of Ben Tre Province. 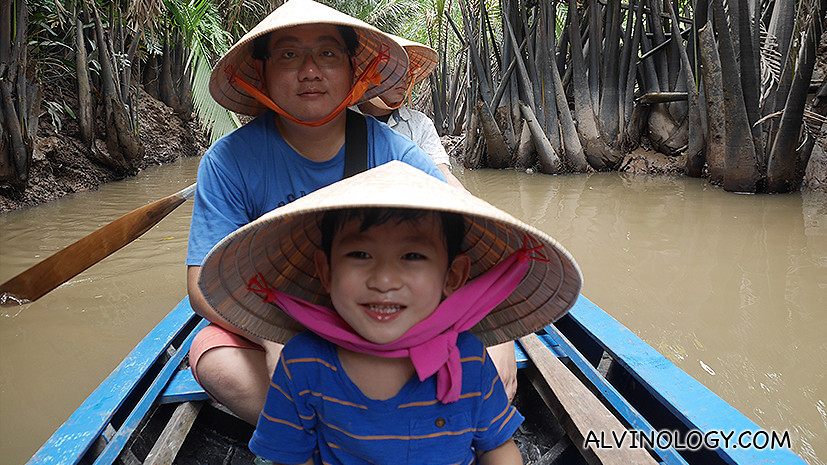 Asher thoroughly enjoyed the short row boat ride along the small canal and was quizzing me about the swamp and the surroundings. Note however that there are no life jackets provided for both adults and kids.

If you have more days to spare, you can consider a longer Mekong River tour, getting on board a cruise boat or even to stay for the night and travel further down.

This was part of the activity together with the one-day Mekong tour. It is fun to watch the coconut candies being made and packaged, fresh from the roaster. Free samples are available and you have to taste one of these candies when it is still piping hot and fresh.

Remember to buy some coconut candies back home for sharing. Go for the original flavour which I find is the best. While you are at the village, there are many others things to check out too:

Explore the city sights on a Cyclo

This was one of the best remembered experience for Asher in HCMC.

The cyclo is a three-wheel bicycle taxi that appeared in Vietnam during the French colonial period after a failed attempt to introduce rickshaws. A double seat (for Vietnamese – an average foreigner would find riding with a companion a bit of a squeeze) is supported by the two front wheels, with the driver sitting behind.

It is not a common mode of transportation and is primarily being hired as a tourist attraction. If you are hiring one yourself, make sure you haggle on the prices to avoid getting conned. We hired ours through a sightseeing and dinner tour with TNK travel.

As the cyclo moves slower than motor vehicles, it’s a great way to catch the city sights.

This is an activity suitable for all ages and perfect if your kid gets tired of walking. The Golden Dragon runs popular daily shows. More details are available via their website.

Although we do not understand the language, the sights and sounds were entertaining, keeping Asher glued to his seat for the full one hour.

Water Puppet (Múa rối nước) is considered to have originated in the delta of the Red river in Vietnam in the 11th century, and the art remains highly developed today in Vietnam.

In ancient Vietnam, the rural Vietnamese believed that spirits controlled all aspect of their lives, from the kitchen to the rice paddies. The Vietnamese devised water puppetry as a way to satisfy these spirits, and as a form of entertainment, using what natural medium they could find in their environment. In ancient times, the ponds and flooded rice paddies after harvest were the stage for these impromptu shows.

This art form is unique to North Vietnam and only found its way to the world stage in recent years as a result of normalized relations with the west.

Enjoy dinner on board a traditional junk ship

This is a little tacky and extremely touristy. The food isn’t fantastic either, but Asher loves the performances and being able to climb up and down the decks of the ship.

For Rachel and I, we were glad to slow down, relax a little on board the ship, away from the hustle and bustle of the crazy traffic in HCMC.

Your kid will enjoy all the sights and sounds! Asher was amused by the live fishes and other sea creatures on sale.

There are many markets in HCMC. The ones we visited are in Ben Thanh and just behind Pullman Saigon Centre hotel where we stayed (ask the hotel reception for directions).

The admission to the War Remnants Museum is cheap and this is one of the most popular museum in Vietnam at the moment with over half a million visitors every year. Not surprising given that most of just know about Vietnam through the tragic Vietnam War.

The museum comprises a series of themed rooms in several buildings, with period military equipment placed within a walled yard. The military equipment includes a UH-1 “Huey” helicopter, an F-5A fighter, a BLU-82 “Daisy Cutter” bomb, M48 Patton tank, an A-1 Skyraider attack bomber, and an A-37 Dragonfly attack bomber. There are a number of pieces of unexploded ordnance stored in the corner of the yard, with their charges and/or fuses removed.

One building reproduces the “tiger cages” in which the South Vietnamese government kept political prisoners. Other exhibits include graphic photography, accompanied by a short text in English, Vietnamese and Japanese, covering the effects of Agent Orange and other chemical defoliant sprays, the use of napalm and phosphorus bombs, and war atrocities such as the My Lai massacre.

The photographic display includes work by Vietnam War photojournalist Bunyo Ishikawa that he donated to the museum in 1998. Curiosities include a guillotine used by the French and South Vietnamese to execute prisoners, the last time being in 1960, and three jars of preserved human fetuses allegedly deformed by exposure to dioxins and dioxin-like compounds, contained in the defoliant Agent Orange.

You may want to skip the gory details on tortures and killings during the Vietnam War for your kids, but they will like the military vehicles on display. Rachel and I took the opportunity to educate Asher on the harm of war and violence, hoping to instill in him, a pacifist mindset which both of us adopt.

Bến Thành Market is a large marketplace in central HCMC in District 1. The market is one of the earliest surviving structures in Saigon and an important symbol of HCMC. It is popular with tourists seeking local handicrafts, textiles and souvenirs, as well as local cuisine.

However, do note that you have to bargain really hard as the first quoted prices are always inflated. There are also a lot of touts in the main market area.

Rachel and I head for the areas where the locals go to and where the stall owners barely speak English. That’s where you will enjoy your shopping more.

Your kids will think you are bringing them to see Ben 10, so make sure they know what they are in for! Having said that, Ben Thanh market has all sorts of stuff including toy shops which also stock Ben 10 toys, along with imitations. Your kids will still have fun!

Chợ Lớn is a Chinese-influenced section of HCMC. It lies on the west bank of the Saigon River, having Bình Tây Market as its central market. Cholon consists of the western half of District 5 as well as several adjoining neighborhoods in District 6. It takes about half an hour to get there on a taxi from District 1.

The stores here mostly sell goods in large quantity and are wholesalers. Nonetheless, there are still some which cater to small purchases, not to mention lots of awesome street food available.

Rachel and I bought lots of lotus seeds and other preserved fruits and nuts.

Note that this is only suitable for the adventurous parents and only if your kid can take long hours of shopping on foot, amidst congested human and vehicle traffic. Asher did not take it too well, but we survived. There’s a reason why Cho Lon is the last item on my list!

These activities should keep you occupied for at least two to three days.

If you are looking to book your flight to Ho Chi Minh, Vietnam, consider flying with Vietjet Air. If you are looking for accommodations, sign up for the Accor loyalty program, Le Club Accorhotels and consider staying at either Pullman Saigon Centre or Sofitel Saigon Plaza. 🙂 The US Embassy in Singapore made this photo fail

Sure, all of us have been guilty of photo fails–or worse, thinking our ugly family photos are actually…
byDanielle Ann The Queen’s Corgi is a Belgian animated feature film based on Queen Elizabeth II and her corgis’ friendship. The film follows a corgi named…
byalvinology
Power up your child's learning with Geniebook.
Sign up for free demo
This is default text for notification bar
Learn more