Be transported back to the 70s at disco-themed Lil’ Tiger

Robertson Walk has always been a popular spot for those looking for a night of fun with well-known establishments such as Kanpai 789 and Wine Connection – well, if you’re in search of a new hideout to chill and enjoy some Friday night drinks, Lil’ Tiger may be just the place.

With disco pendants and Tala pendants aglow, the space exudes a cozy yet warm vibe. I’d recommend for you to choose to sit at the bar, where you can watch your drinks made firsthand by Lil’ Tiger’s friendly bartenders!

We started off the night by sampling some cocktails from their revamped menu. Apart from usual classics, Lil’ Tiger lives up to its theme by offering a selection of Disco-based cocktails at $25 each.

Boogie Wonderland was a great drink to start off the night as it was light and refreshing, with hints of citrus given the orange peel embedded within the drink. Definitely a good pick for light drinkers! It was interesting to see the bartender create a berry-flavoured bubble on our Get Lucky, which had already caught my eye thanks to its bright, lime-green colour. Its shade comes from the alcohol used in the drink – Midori, a melon-flavoured Japanese liqueur.

The chips were crisp and thinner than usual store-bought tortilla chips, which provided a good crunch. To complement them, the salsa was fresh and plentiful as well. I would say that it was slightly difficult to get a good scoop of salsa on each chip given its thin nature, but that hardly matters once each bite has entered your mouth!

The onion rings’ batter were quite crispy and I found that the layer of onion inside was thinner than usual, which worked well for me as someone who doesn’t typically enjoy onions. What I found interesting was the chipotle mayo sauce, which tasted like smoky nacho cheese and complemented the snack well. Personally, this was a good savoury dish for those looking for a small bite alongside their drinks!

The highlight of the starters (and I dare say, the night) was definitely the Gochujang Mac & Cheese ($18). The team shared that the dish was originally a one-time serving during one of their previous themed Saturdays, but was brought back by popular demand – and rightfully so! The portion was sizeable and it could even be eaten as a main! The addition of gochujang added a light, spicy kick to the dish while the mini chunks of kimchi provided a much-appreciated crunchy texture. I found the dish overall to be extremely addictive and surprisingly non-jelat even after many bites. A must-try if you were to come by!

There is also a plentiful selection of mains here at Lil’ Tiger. We managed to sample their Shrimp Taco ($22) as well as their a new addition to their revamped menu – the French Onion Burger ($18).

The Shrimp Taco came as a dish of two pieces and one could immediately see the generously overflowing fillings once the plate was set down on the table. That’s no surprise given that there’s lettuce, corn, pickled onion, coriander and chickpeas accompanying the shrimp! I found the shrimp pieces to be rather juicy and satisfying while the side fillings were creamy and paired well with the former. My guest, however, found it to be a little too creamy for her liking – hot sauce is available for those who feel similarly!

The French Onion Burger features a Snake River Farms Wagyu Patty as well as gruyere cheese, caramelised onions,
butterhead lettuce and burnt onion marmite mayo. Upon first taste, I found that it truly mimics the taste of french onion soup, with a light hint of beef stock. The sauce, strangely enough, reminded me of a saltier version of IKEA’s meatball sauce – my guest begged to differ, though: she felt that the sauce was a good mix of sweet and salty. While the burger was filling and rather tasty, we felt that the fries could have been crispier as they were slightly soggier than expected.

Given that we were already quite stuffed at this juncture, we took a break from food to enjoy more cocktails! This time, we sampled heavier flavours from the Disco menu.

Last Dance, a spirit-forward concoction with a touch of cherry, finished in a smoked jar with applewood, was a sight to behold in terms of presentation. One can smell a unique, smoky scent when taking a whiff, which could also be tasted thanks to its ingredients of absinthe and orientalist dragon whisky.

I found it adorable that Hot Stuff’s cocoa powder topping spelt out the bar’s name – great for the ‘gram! This was possibly my favourite cocktail of the night as well as the combination of egg white and lime juice gave the cocktail a creamy and tangy taste. Zunte Mezcal was the alcohol of choice for this cocktail and it was my first time trying smoky tequila, and I was pleasantly surprised!

Of course, what’s a good meal without dessert? We sampled both offerings on the menu – the PB&J Chocolate Cake ($13) and Warm Salted Nut Tart (#13).

For peanut butter and/or dark chocolate fans, you’ll love how gao the cake is! It was extremely rich and the slice is huge too. I did find it a little too heavy after a few bites but it’s a comforting dish that would be great for sharing among a few friends.

The tart was chock full of mixed nuts (pecan, walnut and almond) and mixed with a jelly-like base. While flavourful, I thought it would be great if the filling could feature more prominently as almost every bite was mostly nut-based given the generally larger size of the nuts. However, the pastry was sweet and suitably crumbly and overall, it’s a dessert I can see myself craving in the future.

With many other offerings on their menu that I did not get to try (e.g. Signature cocktails such as The Grape Mistake), I would return to explore more unique drinks and get another sinful taste of their Mac & Cheese. The establishment is great for gatherings as you can sample their range of foods while enjoying a good drink! [GIVEAWAY] How to fly with a baby – SkyBaby travel mattress

For parents with babies, here’s an awesome product which is specially designed for you if you are thinking…
byalvinology

Fancy traveling back in time to experience Singapore in the 1920s while on a bicycle or an e-scooter.…
byalvinology

Starting today, McDonald’s Singapore will ramp up the fun of sharing with the return Curry Sauce Bottle and…
byIrone Kim 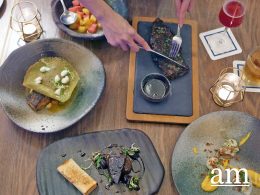 Voted on TripAdvisor as one of the best steakhouses in Singapore, Opus Bar & Grill celebrates its 7th Anniversary…
byStaff Writer