Earlier this week, a National University of Singapore (NUS) undergraduate, Monica Baey has come forward as the girl who figures in a controversial shower video that was allegedly taken by a Nicholas Lim, said to be also a student at NUS, as exposed by Monica.

Just yesterday, NUS was quick to respond to Monica’s call for a stiffer punishment for the alleged perpetrator and issued an official statement saying it will convene a committee to review its disciplinary and support frameworks.

Things move much faster when there is media and public attentions. In light of the recent move by the Singapore Parliament to introduce an anti-doxxing law and a fake news law from April 1, 2019, there are lessons from this Monica Baey shower video incident which everyone can draw from.

We would all agree that Monica is a victim of a sex crime if the allegations against the said Nicholas Lim are true. However, Monica was the one who chose to reveal Nicholas Lim to the public on her Instagram account, including pictures of him and other personal information which will lead to him being identifiable by online vigilantes.

As such, did she commit doxxing?

With the enactment of the anti-doxxing law, does it apply to victims of crimes who name their perpetrators?

2. If Monica Baey’s accusations turned out to false, would all the online sites and news media whom reported on her accusations be charged with the new fake news law?

This is sometime we are extremely mindful and cautious about as we are one of the online sites reporting on Monica’s story. Having said that, we do believe in the integrity of the Singapore government and the Ministry of Law to apply the new fake news law only when they need to protect society from damage by online falsehoods created by “malicious actors”.

Of course, no news site has deliberate written any blatantly fake or fabricated stuff about the saga.

In this regard, there is clearly no malicious intent here to spread any online falsehoods. Nonetheless, this is a grey area which everyone could still be treading on thin ice.

3. Should the police and the authorities at NUS bow to public pressure?

There is strong call online for NUS and the police to re-investigate the case and to review the punishment meted out to the said Nicholas Lim for his alleged crime.

The school and the police would have considered several factors before they first meted out the first set of punishments. When NUS said that they will be reviewing their decision again, would this be bowing to public pressure?

4. What are the avenues for social protection for vulnerable sex crime victims who chose to out themselves?

While Monica Baey has her supporters, there are detractors as well who are shaming her online. She shared that her mental health has taken a toll after the incident.

Is there any form of social protection for vulnerable sex crime victims like her who chose to out themselves?

5. What form of redress do victims of leaked sex or nude videos or photos have?

Monica was fortunate that her shower video was not leaked online. Unlike her, there were many whom were less fortunate like prominent influencer, Christabel Chua (aka Bellywellyjelly) who had her sex videos and photos leaked online by her boyfriend, Joal Ong.

The problem with the Internet is that once these videos and photos are uploaded onto the dark web, it will be impossible to get rid of them. Just ask Edison Chen, the “father of leaked sex videos and photos”. If even someone with Edison’s clout and money can’t erase his leaked stuff, it is doubt anyone else will be able to.

As such, what form of redress do victims like Monica have?

These are some of the tricky questions which crossed our minds when we were covering Monica Baey’s story. We don’t have the answers, but we think that as a society, these are questions which we ought to think about after this incident.

What are your thoughts? Share them with us in the comments section. Cold Storage is having a 50% sale off in all their branches, on almost EVERYTHING 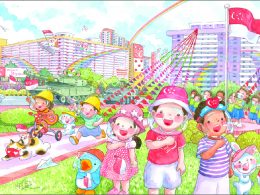