The only people who learned anything from the Letitia Chai protest were her classmates. She looks like she missed the whole point of basic education and college.

A recent report from Huffington Post mentioned an Asian student in Cornell College named Letitia Chai stripping in the middle of her thesis defence practice in a class run by a female Caucasian professor.

The report said that when Letitia was presenting a dry run of her thesis to a class of 50 people, her professor, a Caucasian woman named Rebekah Maggor, asked her if that was the outfit she planned to wear to the actual defence. The report said that Maggor told Letitia that her outfit was making a statement.

In a report by the Cornell Sun, Letitia said, “The professor proceeded to tell me, in front of my whole class, that I was inviting the male gaze away from the content of my presentation and onto my body.”

A male international student chimed in that Letitia has a moral obligation to dress conservatively.

Then, she stripped down to her underwear. Watch the video of when she returned from “calming herself down” below:

What the other people in the room say actually happened.

13 students from the same class, though, added some important details to the narration of events. In a statement, they said that the following wasn’t covered by Letitia:

You can read the students’ statement here, which includes some background on their professor and why people should know all the factors in play before passing judgment.

Miscommunication and missing the point

The students put forth that Letitia and Maggor simply had miscommunication, along with missed and mixed signals in their exchange about her clothes.

The professor did not impose a dress code on her, but actually just asked a question. Things escalated because a discussion was happening and Letitia did not know how to respond to negative comments about her wardrobe. Too upset to listen, she walked out of the room and missed both negative and positive comments.

Letitia’s actions of stripping even after the private conversation even seems underhanded, since she could have raised her concerns with Maggor directly. Instead, she chose to make a “protest” during a dry run that was supposed to help her present her thesis to an academic panel.

Maggor’s question was not phrased correctly, but was it incorrect? No, and she gave people ample time and chance to criticise her. Was it oppressive? Possibly, the tone was certainly oppressive, but Letitia missed the part about accepting and dishing out criticism.

Look, she even made a Facebook page of her “protest”

What was wrong with Letitia’s “protest”

People (and Letitia) have forgotten that everything happened during a dry run of her thesis, in an academic discussion.

Academic discussion on any topic should always be framed appropriately within a certain context, paradigm, or set of theories. It’s the only way discussion can be productive and add to the knowledge of future generations.

This is why, even when Maggor asked the question in a wrong way, she invited comments and discussion, expecting students to criticise her and Letitia in an appropriately framed manner, which was in the topic of public speaking and appearance.

Letitia, on the other hand, did not operate in the right framework. She chose to focus on gender and racism on her as an individual and even asked other students to forget they were in a classroom.

Unable to use her mind and academic tools criticise her professor, she chose to take off her clothes. In fact, her words were “A leap of faith.”

You’re in a college class on public speaking. Leaps of faith are for sociological and anthropological discussions or acting class. Defend your choice of outfit (whatever it is), academically and substantially.

While these topics are important, her protest had no place in that classroom. She could have criticised her professor using the right tools, and proved her professor wrong–and even oppressive, but instead chose a protest that did not help herself. She was given all the chances.

Protests are for times when persons of authority do not listen to you. It is the last recourse for marginalised groups. Letitia was in no way marginalised inside this classroom, she was given a voice and people were even required to listen and comment. In this situation, not only were there people listening, Letitia was asked to speak. She did not need to “protest” anything.

If the venue for discussion accords you respect, should you not respect it in the same way?

She just acted out on her hurt feelings–which have no place in academic discussion. No one was saying her sentiment was wrong or that what she felt wasn’t valid–and she had a chance to speak, but she chose the wrong action. This disrespected the whole spirit of academic discussion and learning of the classroom.

Upon stripping, Letitia basically disallowed Maggor from generating discussion about the topic, and would only embarrass the former further.

As of publishing, Letitia has declined media interviews and simple posted her video of her thesis defence practice online.

So who did it help?

Luckily, the thirteen students who put out the statement learned quite a lot from the experience. While agreeing and validating Letitia’s feelings, they also knew that Letitia’s side of the story was just one side, and that their professor’s image was not nuanced enough to provide the public with all the information.

Kudos to the students who made that statement and properly framed the whole issue in terms that the public may understand.

I remember a college professor of mine who did not like any of his students wearing flip flops, shorts, sleeveless clothes or the like. He would always come to class in a suit and tie and said that he would send us out of the classroom if we did not dress to his code. His reason for his code was, if he came to class in a suit and tie every time to respect us as learners, the least we could do was show up with proper shoes and our legs and arms covered to respect him as a teacher.

The rules applied whether we were male or female.

He also said we were free to protest naked or in our underwear, but outside the classroom. Just don’t disrupt the class.

Next time, when you feel upset in class and want to prove a point, use your words and your tools of analysis. You’re a college student, so you’re equipped to discuss and point out your professor’s mistakes.

It’s something even the smallest preschooler is taught when they get emotional or throw a tantrum.

Read about this college student, Bumble Bee, who skipped protesting and straight up had a meltdown in front of the whole class. As the world copes with the challenge of the COVID-19 crisis, Evolve MMA is giving the Martial Arts…
byIrone Kim 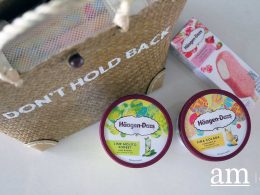 Get in the ‘spirit’ of spring! Häagen-Dazs presents three new tropical flavours with a hint of alcohol –…
byalvinology