Being a gang member seems like a cool thing when you are young. You get to hang out with a bunch of friends who show no regards for the authorities and do whatever they want; you get to bully people and abuse others; you don’t need to work hard to make money, but instead, get it through illegal means like stealing and extortion. If you like to live on the wild side and waste away your future, it’s always a good idea to join a teenage gang.

Finding a good gang leader to follow is an important decision when you decide to join a gang and Singapore gangster, Charles Koh Rong Guang, is an example of an epic fail gang leader whom nobody should be following or emulate.

If you have been following the news lately, Charles Koh Rong Guang, 25, was the leader of a youth gang when he repeatedly raped a girl when she was 13. This legendary character is now working as a salesman and has been sentenced to 28 years’ jail and 24 strokes of the cane this week. Koh commited his offences when he was 21 and was convicted of three counts of rape, along with eight other offences, including sexual assault by penetration, sexual exploitation of a child, voluntarily causing hurt, and criminal intimidation.

Why is Charles Koh Rong Guang such a failure?

The numbnut is going to jail for 28 years and will be over 40 when he is released. We are not too optimistic about his future prospect as an aging salesman after his release. Will his gang members still be there to welcome him home after he is released from prison like in those Hong Kong triad movies?

If you are thinking of joining a gang or aspiring to become a gang leader like Koh, here are some life lessons you can learn from him on how not to be a gang leader.

1. Don’t rape your own gang member

The 13-year-old girl was a member of Koh’s teenage gang. You would expect gang members to ‘take care’ of each other, but here’s a gang leader who is comfortable to rape and abuse his own gang member. The prosecutors described that Koh treated the victim as a “‘f*** buddy’ – someone to have sex with and ‘throw’ once he was done using her”.

Once, with a spanner, he forced her to fellate him in addition to raping her at a staircase landing in Choa Chu Kang Centre near a karaoke outlet.

The penalty is pretty harsh in Singapore for rape crimes, and particularly (as well as rightfully) so if the victim is underage. Koh not only rapes a girl who was a member of his gang, but he also raped her despite knowing she was underage.

The girl was also a victim of an abusive father and was very staying away from home to avoid his father. Little would she know that the gang she associated with would have a gang leader who is even more abusive.

3. Don’t offer your gang member to other people for sex

After raping the victim, Koh was unrepentant and even offered the victim to others for sex. Luckily, his other gang members were more humane and nobody took up his ‘generous’ offer.

Unfortunately though, in a separate incident, a teenage gangster, Alson Tan Yu Seng, 15, who probably aspire to be like Charles Koh Rong Guang, went on to rape the girl while two of his friends pinned her down. In a Straits Times report, Tan was said to have told his friends – Bryan Ong Jing Chong and Tan Wei Guang – he had seen his headman rape the girl and suggested that they have sex with her. The trio played a game of scissors-paper-stone to decide who would go first. But the two friends did not go on to rape the girl as the trio were interrupted.

All three numbnuts have been arrested and sentenced.

To ensure that the victim did not reveal the offences committed against her, Koh took naked photos of her and told her to pose in a compromising manner with his second-in-command in the gang, Fu Yiming, 20.

For some unknown reasons, Koh went on to circulate the photos online via a photo collage. The victim would have likely quietly suffered in silence with regards to the rapes, but Koh had to push it further and make his own crime public. The victim finally made a police report and that was where the lid was blown off.

This guy totally deserves a Darwin Award for stupidity as a gang leader. How can you be a leader of a criminal syndicate and be so dense as to deliberately expose yourself and draw attention to your own crime?

The victim was introduced to the gang by Koh’s second-in-command, Fu Yiming, who tried to protect the girl on several occasions. Instead of ‘giving face’ to his trusted assistant, the gang leader threatened to beat him up instead and went on to rape the girl.

Never ever follow a leader who is going to disrespect you.

6. Don’t commit crime when you are on probation

Koh committed his rape offences while serving a two-year probation for rioting with a deadly weapon in 2013. When you know the police are on your tail, the dumbest thing to do is to go out and commit more crime so they can charge you with more offences. Koh did exactly just that.

Koh is currently out on bail for S$100,000, posted by his father, and is appealing against his sentence. Maybe he will try to get his IQ checked so he can plead that he is of extraordinarily low IQ and may not know about the severity of his crimes and how dumb his actions were.

Our recommendation is for Koh to be sentenced to share a cell with former China tour guide turned crook, Yang Yin (杨寅), so the two of them can exchange tips on how to beat each other to the title of Singapore’s dumbest crook.

Actually, if you really die-die want to join a gang for camaraderie and friendship, consider joining the People’s Association Youth Movement (PAYM) – the largest ‘gang’ in Singapore. The PAYM network currently consists of 107 Youth Clubs based at the various Community Centres all over Singapore. I am pretty sure their network is much more extensive than 369 gang or Ang Soon Tong or whatever. You will get to enjoy free buffet, participate in nation-building activities like the National Day Parade and maybe even meet Prime Minister Lee Hsien Loong! 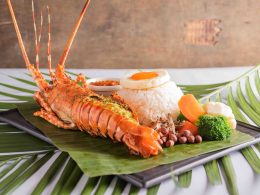 In observance of Singapore’s 57th National Day, Jack’s Place plans to take you by surprise with a special…
byIrone Kim

Consisting of 333 islands, the alluring Fiji archipelago offers endless lagoons, gently swaying palm trees and the most…
byIrone Kim
Power up your child's learning with Geniebook.
Sign up for free demo
This is default text for notification bar
Learn more