THE SOUND OF MUSIC musical is showing at the Mastercard Theatres at Marina Bay Sands from now till 3 December 2017 and you won’t want to miss it.

The original 1959 Broadway production of The Sound of Music won six Tony Awards, including Best Musical, and was Rodgers and Hammerstein (the influential American musical theatre writing team behind the likes of Broadway shows like Oklahoma!; South Pacific; and The King and I)’s biggest success.

In 1965, a movie adaption was made starring Julie Andrews as Maria. The movie won five Oscars, including Best Picture, and remains one of the most popular movies of all time.

The Sound of Music is based on the memoir of Maria von Trapp, The Story of the Trapp Family Singers. Set in Austria on the eve of the Anschluss in 1938, the musical tells the story of Maria, who takes a job as governess to a large family while she decides whether to become a nun. She falls in love with the children, and eventually their widowed father, Captain von Trapp. He is ordered to accept a commission in the German navy, but he opposes the Nazis. He and Maria decide on a plan to flee Austria with the children.

The Sound of Music brims over with some of the most memorable songs ever performed on the musical theatre stage, including My Favorite Things, Do-Re-Mi, Climb Ev’ry Mountain, Edelweiss, The Lonely Goatherd, Sixteen Going on Seventeen, and of course the glorious title song The Sound of Music.

If you can’t recall any of the songs, watch this trailer to refresh your memory. Everyone has to got to know at least one song from The Song of Music at some point in our life!

This should be the third time I am watching this musical and I never grow sick of it. The songs are timeless classics, always good to hear them again at different stages of your life whereby you will get different inspirations as well.

The love story between Marie and the Captain is a simple one, yet is able to captivate audiences from around the world and through the ages, precisely because of that. Sometimes, the old formulaic cheesy love stories are still the best remedies to escape the harsh world we live in today.

This time round, I watched the musical with my son, Asher Lim, 6. I was a little worried Asher might get bored or lost with the storyline, but he seem to enjoy himself just fine, sitting through the whole show and clapping, singing along when he knows the songs being sung on stage. Whenever the Von Trapp kids come onstage, I could observe Asher perking up and enjoying their performances to the fullest.

As Asher is attending violin lessons, he could appreciate how Marie was using The Sound of Music song to teach the kids how to enjoy music and to sing. The show is generally kid-friendly, in spite of the Nazi bad guys and the WW2 setting.

After the show, I quizzed Asher about it and he got about 80% of the storyline. He could tell that there was a love story going on between Marie and the Captain, as well as the characters of the Von Trapp kids, but did not get most parts about the war and the Nazi soldiers. I explained to him that the latter were very evil people like the villains in superhero movies who want to take over the world for their nefarious ambition.

While The Sound of Music is not new, some tales are just worth enjoying over and over again and this is one of them.

Tickets are available online via SISTIC from S$98 for Cat C and D and there is a special promotion for students, NSFs and seniors above 65 for just S$35 a ticket. 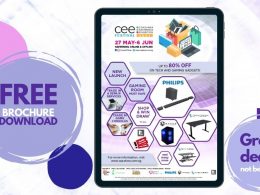 Singaporeans should DIY more so queues can move faster. Agree?

Wished that queues at the supermarket/cinema/MRT station would move faster? That it would be easier to find a…
byRachel Chan

[Lobang Alert] My Millennium: We Clean. We Care. We Welcome.

To demonstrate their commitment to customers during this COVID-19 situation, the Millennium Hotels & Resorts group has launch…
byalvinology
Power up your child's learning with Geniebook.
Sign up for free demo
This is default text for notification bar
Learn more