Ask any Singaporean which Resort World location is their favourite and it is a good bet that they would pick out the iconic Casino and hotel that flanks the gates to Singapore’s very own leisure island, Sentosa. As host to the island’s very first casino and also to the renowned Universal Studios theme park, this shouldn’t come as a big surprise. However, Resort World’s presence can be found further up North too and it offers the same great level of hospitality that has endeared it to so many here. This is where it all started with a vision by founder Tan Sri Lim Goh Tong, of a mountain top resort for all. Since then, Genting Highlands resort has stood the test of time and today, it is readying itself for a new generation of visitors and holiday makers with a whole slew of exciting developments such as the SkyAvenue, the refurbished Hotel On The Park, and upcoming Twentieth Century Fox World theme park.

Up on the familiar cool slopes of Genting Highlands, there is even more to do now. Each day starts off with a brilliant sunrise, cool, crisp air and relaxing greenery as far as the eye can see. A morning stroll is the best way to take it all in, and slowly ease into the new day. Just opposite the Hotel On The Park, connected by a covered walkway, you will find SkyAvenue and its impressive array of shops and restaurants. There is the much-lauded Burger and Lobster, which serves exquisite lobster rolls, and for great tapas, you should make a stop at La Fiesta. The paella options are varied but for guaranteed satisfaction, pick the lobster version. Round off the meal with some of the excellent tapas like cuts of jamon or calamares and you’ll leave with the restaurant a happy camper. If you are in the mood for a serving of Malaysian’s famous cuisine, SkyAvenue’s Malaysian Food Street outlet has all the country’s favourites, such as Chinese roast meats by renowned Resorts World Genting roasting chef Cheang Seang Loong, Wonton Noodles, Nasi Lemak, and much more. Each stall was carefully chosen from amongst the best in its specialised dish, so almost any random pick will make a good meal. Culture vultures can then head to Seni Kome, a museum that highlights the arts and culture of Malaysia’s Eastern Coast. There were displays of traditional handicraft like several variants of the keris, a local dagger with a wavy blade, strikingly designed masks and an orchestra of gongs. My favourite display was of a Wau Bulan. As a symbol of the Melayu culture, depictions of this locally designed kite can be found in many places, and even on the local currency. For a bit of a thrill, take the new Awana Skyway to the Chin Swee Caves Temple. Included with the regular fleet of cable cars, special gondolas with glass floors were installed to give the rider a 360-degree, unfettered view of the mountains. The Chin Swee Cave Temples have been under construction since 1974 and were officially opened 20 years later. The large statues of Buddha and Kuan-Yin surrounding the sky terrace on the upper levels were impressive and as was the prayer hall at the lower level. Solemn and dignified, the atmosphere there was one of great reverence.
To complete the day, descend a litle further to reach the Premium Outlets mall. All the coveted brands are present – from Adidas to Aigner. A true shopper’s delight, bargain hunters flock to the mall in droves. Malaysia’s island paradise, Langkawi, has a special place in our hearts. The island has an abundance of luxury, as well as nature. Even here, Resorts World bears the standard of the brand name proudly. The hotel compound and its Medditerranian themed designs gives off a relaxing holiday vibe, making it perfect for a short getaway.
Delightfully designed to take in the majestic morning views, the East-facing rooms make the best of the sun rise which, you can watch from your very own balcony. After a sumptuous breakfast at the in-house Seagull Coffeehouse, it’s time to explore the natural wonderland that is a prominent attraction on the island. The Kilim Geoforest Park is a UNESCO listed site filled with unique mangroves, limestone caves, swimming monkeys and hawks dueling in the sky. The boat ride through the swamp was the most exciting for me, as the narrow waterway made the ride especially dramatic. At sundown, there’s nothing better than a romantic sunset cruise. The quay just adjacent to the hotel has vessels that arranges such adventures. With a well stocked icebox and kitchen, all you have to worry about is finding a good spot to watch the amber skies and sunset from. In the evening, the barbecue grills get fired up and the music starts playing all the way until the ship pulls into the dock. As the night progresses, the cafes, restaurants and other establishments along Tanjong Rhu beach is the perfect place to head to for some excitement. If you are lucky, you can even catch a firey performance up close! The short weekend with Resorts World was a treat. It was even better that being so close to home, travel times were not excessive, but dispite the close proximity to home, everything was so new and fresh that I could easily be on the other side of the world. Jiang-Nan Chun has launched a new a new seasonal menu, designed to showcase the best of fresh Cantonese…
byalvinology 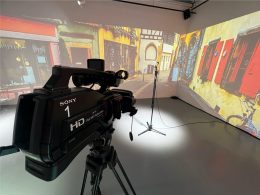 Here are fun things and unique activities you and your friends can find downtown this weekend – GR.iD

Newly-reopened youth destination, GR.iD introduces new things to do while downtown for students, youths and the young at…
byIrone Kim