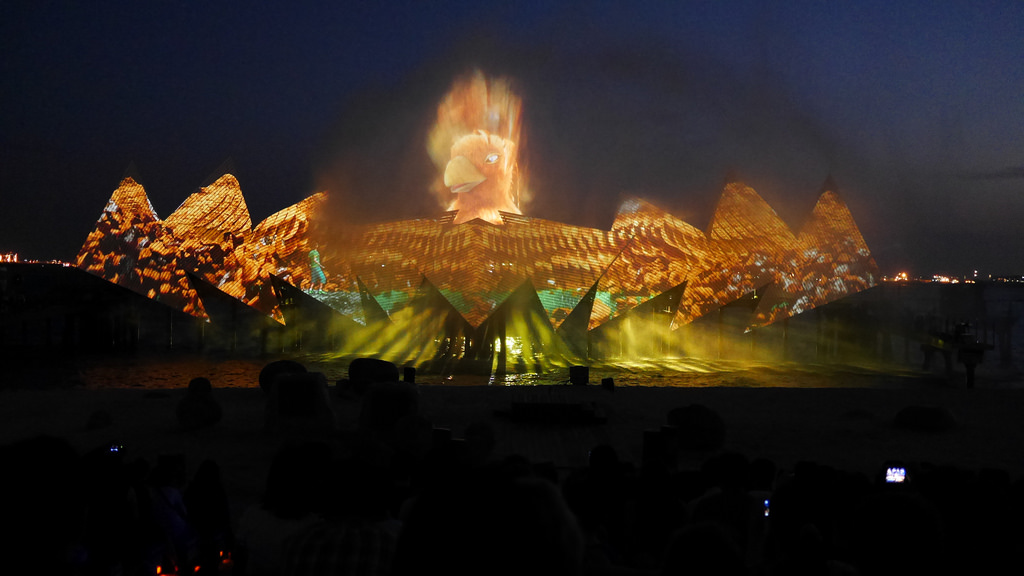 “Wings of Time is contemporary in nature,” said the PR lady as she handed me my tickets at the door. It sounded like an ominous warning, although I am sure that I must have imagined it. It was my first night show at Sentosa since the iconic Musical Fountains ceased operations in 2007 and I had never seen Songs Of The Sea before. It was definitely time for “contemporary”. 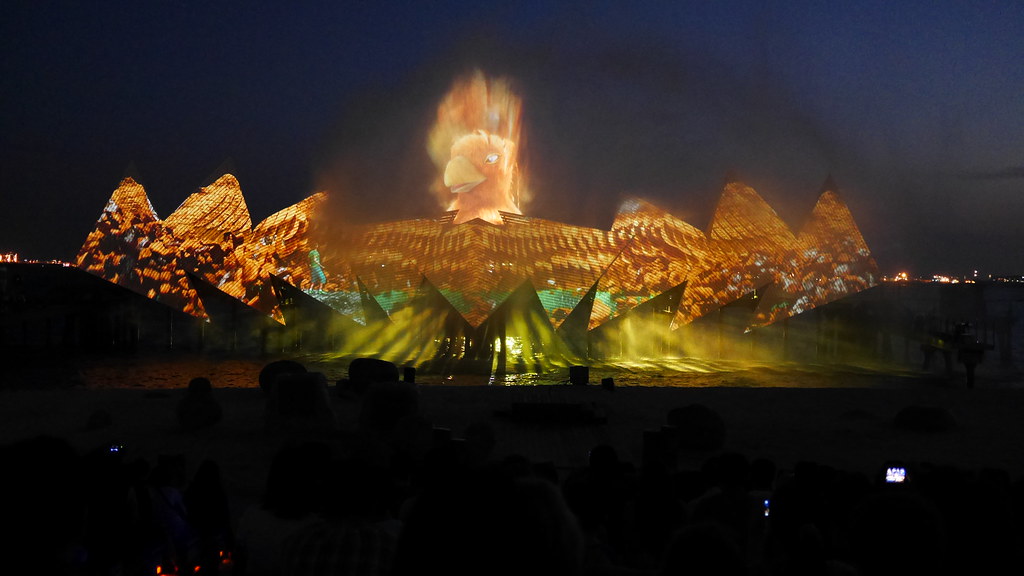 Meet Shahbaz, the main character of Wings of Time

The 25-minute show, featuring robotic fountains and pyrotechnics, is projected against a backdrop of white, geometric panels, which is a complete departure from the rustic kelong (Malay for “fish farm”) in Songs of the Sea. The highly-precise laser beams which shoot out from behind the avant garde screen can fool one into thinking that it could be daylight, or that the images are – gasp – real. 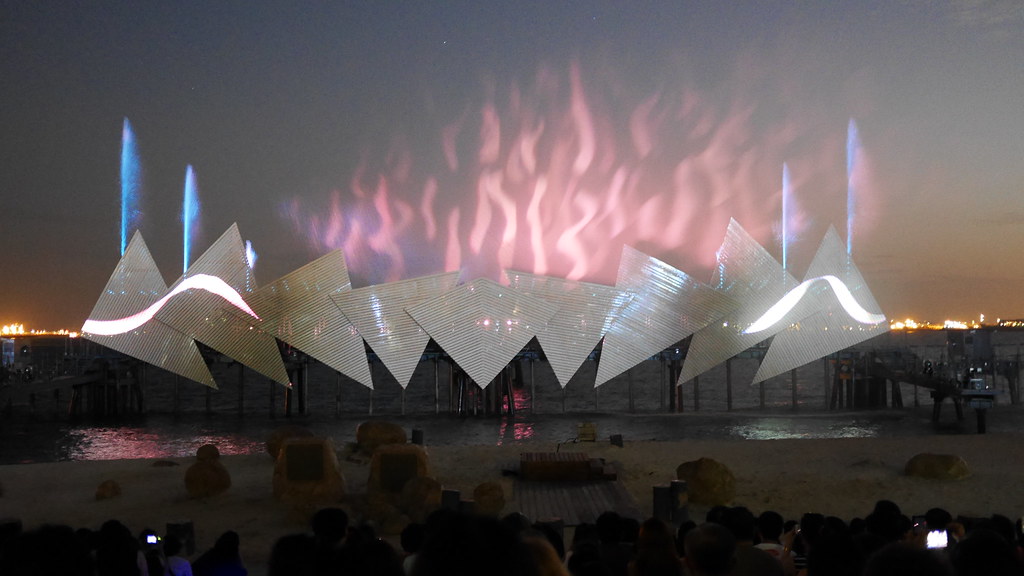 The avant garde backdrop of the beachfront stage

It’s not difficult to understand why a “bird-like creature” resembling a scarlet macaw, with its polychromatic wings, is the main character of this extravaganza.  Shahbaz, as it is called, awakens from a deep slumber and swoops across panoramic vistas from the Industrial Revolution, Silk Road and African savannah as it attempts to make its way home. 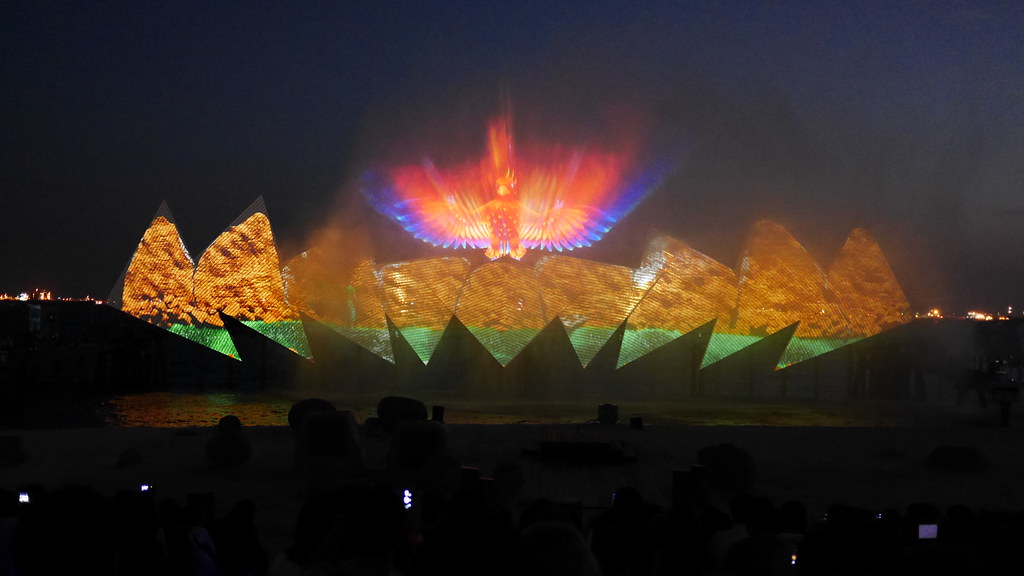 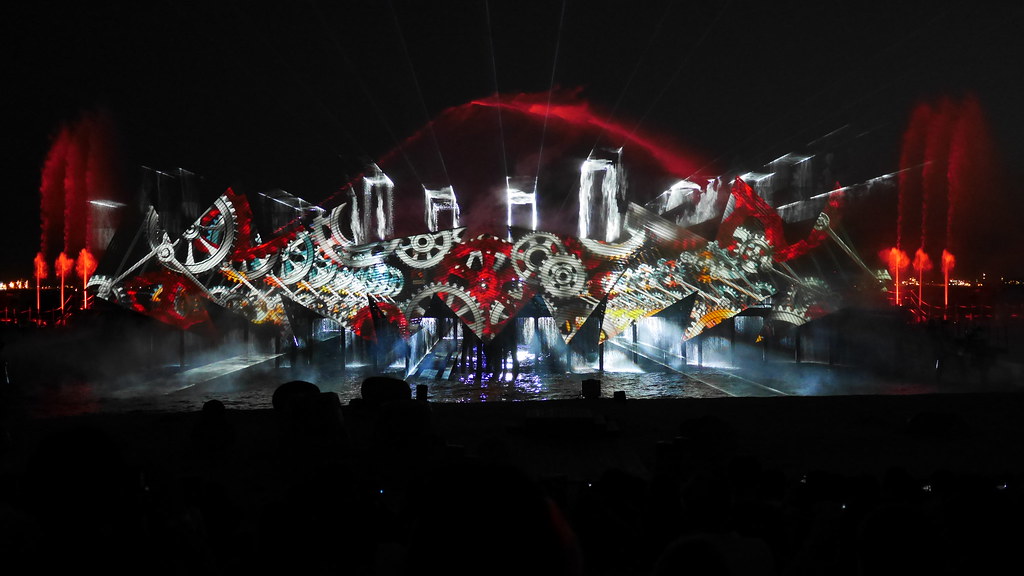 The Industrial Revolution in all its robotic glory 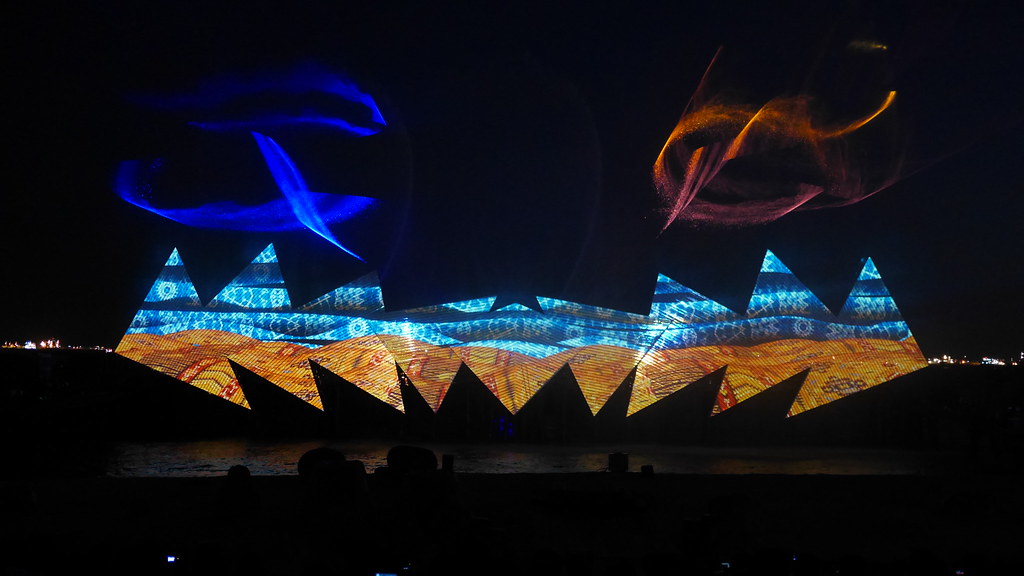 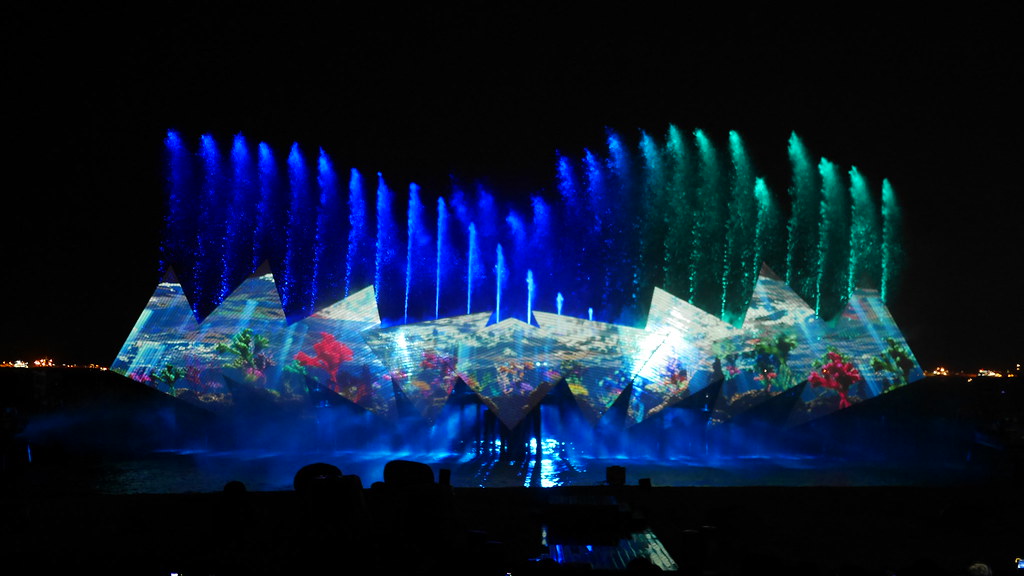 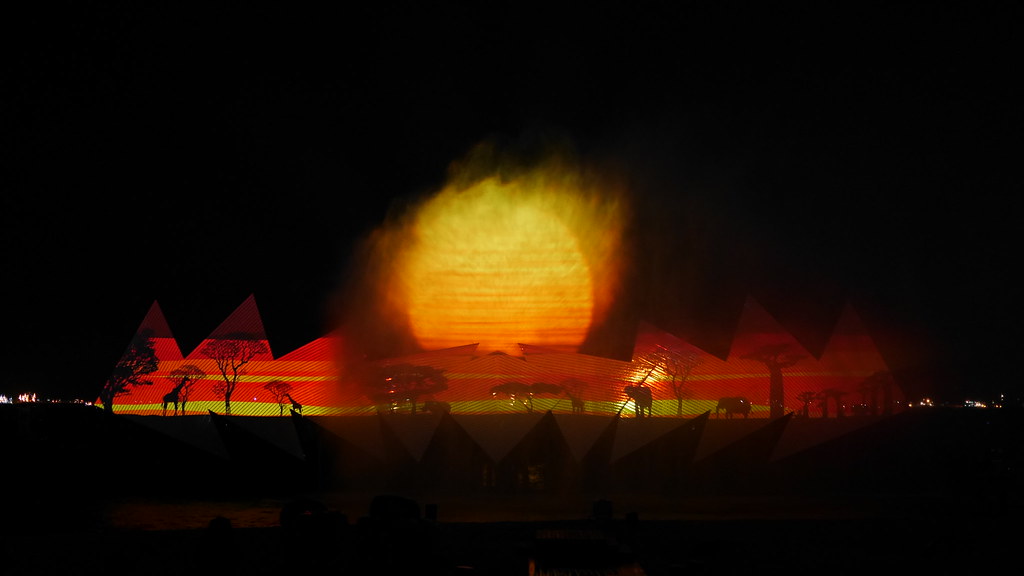 A blazing sun sets upon the African savannah 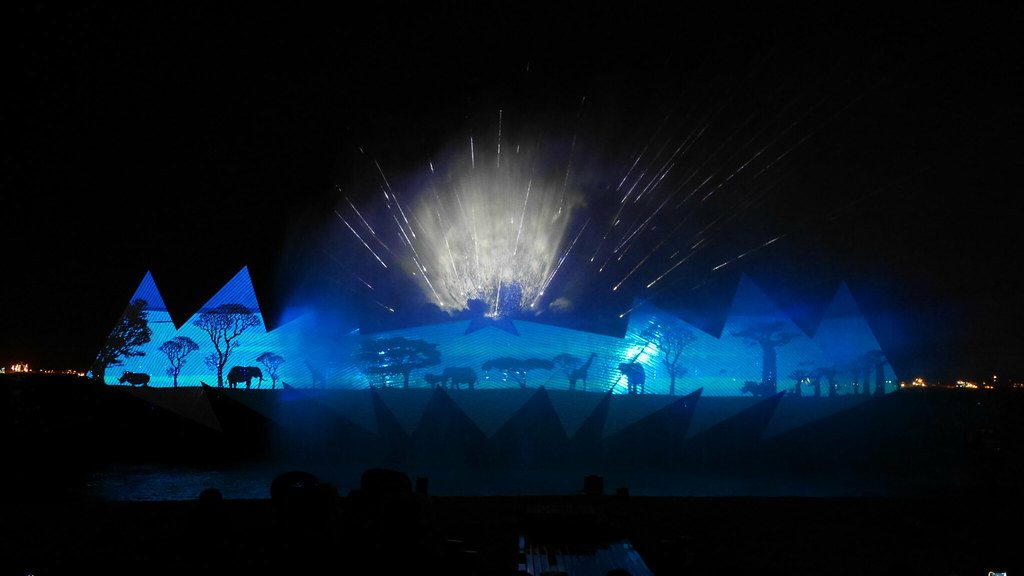 Moonrise over the savannah 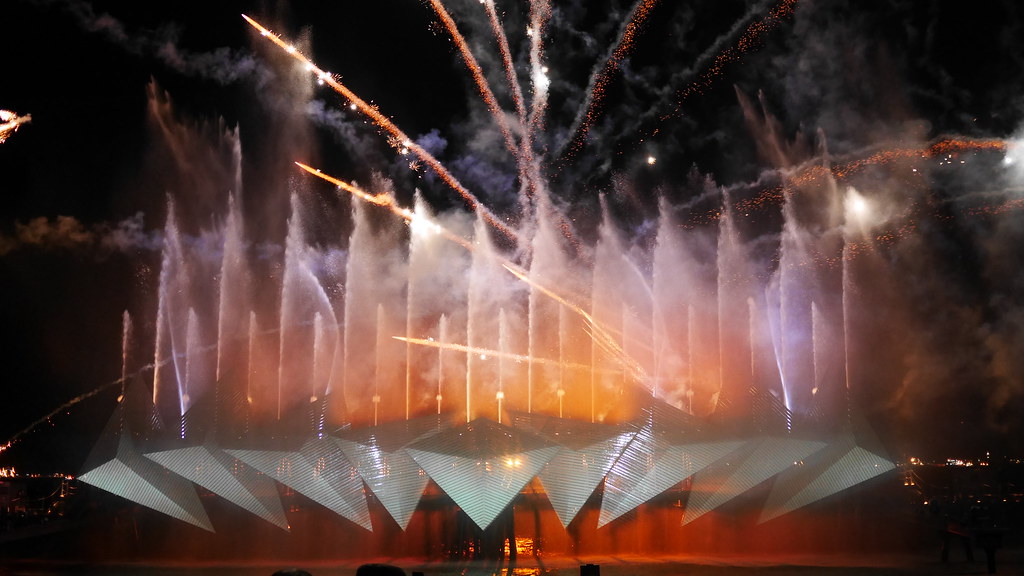 As with all night shows, it must culminate in a fireworks display

While the musical score of Songs Of The Sea featured familiar local oldies like Chan Mali Chan, the live talent performers of Wings of Time sing a modern English ditty which goes “When you’re far away from home…” I can’t find the title of the song or remember the rest of the lyrics, but the tune sure got stuck in my head. There’s nothing Singaporean about it – which is why it will hopefully appeal to an international audience.

The $10 million show is produced by ECA2, an established French events company, and curated by Sentosa. It opened on June 17, after a seven-year run of over 5,000 shows of Songs of the Sea. Up to 2,500 people can be accommodated at this seaside performance.

Name: Wings of Time
Showtimes: 7.40pm and 8.40pm, daily
Duration: 25 minutes Tickets: Premium seats at $23, standard seats at $18, Singapore residents $15
Where: Siloso Beach
How to get there: By bus – Sentosa Bus 1, 2 and 3; by monorail (Sentosa Express) – get off at Beach station; by car – park at Beach Car Park (rates here)
Website: http://www.sentosa.com.sg/en/attractions/beaches/wings-of-time/ 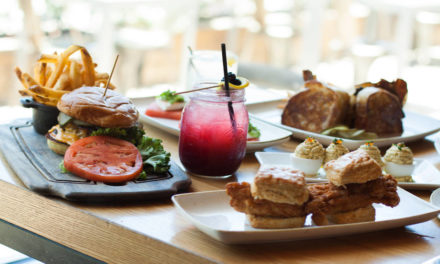 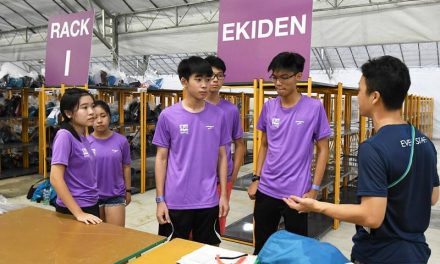 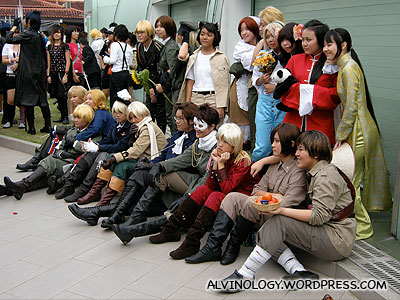 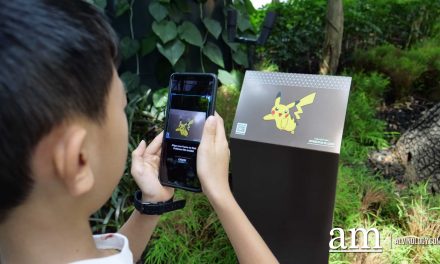