Her pictures were splashed on newspaper cover since her crowning as this year’s Miss Singapore Universe – both for good and bad reasons.

Brand manager Rachel Kum, 24, won the coveted title two months ago and was also crowned Miss Body Beautiful and Miss Personality. It was a clean sweep. The judges were totally gaga over her, so were the media.

Two months later, there are call from netizens to have her title revoked because of a few alleged “racy” photos of her, surfacing on the Internet. Ms Kum finds herself on the cover pages of the tabloid papers, Lianhe Wanbao and The New Paper:

Are the photos really that bad?

One showed her eating a phallic-shaped cake; another showed her pretending to eat a giant costumed phallic woman and the last one showed her playing with a BJ-doll:

The photos may have caught Ms Kum in some very unglamorous postures, but seriously I don’t think they are anything contentious lei. I am sure many of us got sabo-ed into raunchy stuff like these before at some parties where everyone got too drunk or wild. Don’t be so uptight lah, give the lady a break.

Having said that, although Ms Kum looks really gorgeous, I have to admit, she has that same kind of look as “plastic” beauty/blogger, Dawn Yang. Not really my kind of girl as she looks too perfect and unnatural. 🙂

Anyway, here’s the full story of Ms Kum and her racy photos via The Electric New Paper:

SUGGESTIVE pictures of Miss Singapore Universe Rachel Kum have surfaced on the Internet and sparked calls for her to be stripped of her title.

FLAMED AGAIN: Miss Kum was dogged by whispers during the Miss Universe pageant that she skipped the preliminary auditions and only came in midway through the competition to win the crown.

The photos posted on The Straits Times interactive website Stomp on Tuesday show her posing with a blown-up sex doll, a birthday cake with a phallic symbol and a friend dressed in a phallic-looking costume.

It seems the pictures were taken off a blog.

The Stomp article said: ‘There was no timestamp on the photos or on the blog in which her photos were found, so it is unclear whether the photos were taken before or after she was crowned Miss Singapore Universe.’

Some netizens feel the pictures are unbecoming of a beauty queen representing Singapore and that she should be stripped of her title.

But the pageant organiser has no intention of doing so.

Mr Daryl Pang, one of the directors of Derrol Stepenny, which organises the pageant, said: ‘It’s no big deal, they were just photos taken during some parties people threw for her.’

The New Paper couldn’t contact Rachel, whom Mr Pang said is overseas on a modelling assignment, but he said he was aware of the pictures since a month ago.

Rachel had seen the pictures online and spoken to him about them, he said.

‘Rachel was upset about the photos. Anyone will get mad. But she wasn’t worried of being stripped of her title.’

He said the pictures were ‘definitely not taken this year’.

Rachel told him the picture of the cake was taken at her birthday party while the other two were taken during Halloween, he said.

The two Halloween pictures showed Rachel in different clothes, and Mr Pang couldn’t verify if they were shot on the same occasion.

A video posted in 2006 on YouTube, titled ‘My surprise bday party in seattle, USA’, features the same cake as in one of the photos.

Someone in the background was heard saying: ‘Make a wish, and blow, Rachel.’

In the video, there was a second cake with the words, ‘Happy 21st Birthday Rachel’.

Two-third of the 68 comments left on Stomp by last night were critical of Rachel, who was also a finalist in The New Paper New Face contest in 2007.

Stormzer wrote: ‘So this is the standard of gals that singapore wanna send out to represent our country?? Wat a laughing stock!’

But some posted messages in support, including Fuzakeru, who wrote: ‘If you wish to superimpose your moral values on others, you are a bigot and also would inevitably decrease the pool Singapore can choose from.’

Mr Pang said the pictures would not affect Rachel’s chances of representing Singapore in the Miss Universe pageant in the Bahamas next month.

‘No, everything will carry on as per planned. She didn’t commit any crime,’ he said.

‘Of course, we wouldn’t want a case of Edison Chen, but for Rachel, there wasn’t any nudity, she didn’t expose herself, and she didn’t murder anyone. So why should she be penalised?’

He added that his stand would not change even if more criticisms of Rachel surface online.

Mr Pang said the organiser does pay attention to public opinion, but in this case, he feels that Singaporeans should do their best to encourage their pageant representative.

‘Why make her feel so down? If we sadden her, that will only reduce her confidence, and affect her chances of winning.’

Does Mr Pang think Rachel’s title hopes will be affected?

No, he said, as the judges are not ‘shallow-minded’.

He added: ‘Moreover, these pictures are taken way before she was crowned.

‘And even if they were shot after she received her title, I still don’t find that an issue.’

Mr Pang feels those offended by the pictures are ‘just square-headed’ and ‘probably don’t attend parties’.

He also suspects that the photos may have been circulated maliciously.

‘Some people may look upon Rachel as their role model, while some may see her as their enemy,’ said Mr Pang.

This year’s Miss Singapore Universe pageant was abuzz with talk of how she had allegedly skipped the preliminary audition rounds and compulsory activities, and was brought in midway to win the crown.

Mr Pang has always denied this.

Ms Jaime Teo, 32, who won Miss Singapore Universe in 2001, told The New Paper over the phone that she hasn’t seen the photos.

In any case, she feels ‘it’s not a problem at all’.

‘People should loosen up. The society shouldn’t see Miss Universe as a saint or angel. A beauty queen carries a good cause, but she still can have fun with friends,’ she said.

But unlike Mr Pang, she believes Rachel’s shot at the title may be affected if ‘the matter blows up too much’.

‘We are in a world where people’s opinions matter.’

But she added: ‘This may be a double-edged sword. Rachel may catch the judges’ attention because of this.’

Ms Teo advises Rachel to ‘do nothing’ and just ride out the controversy.

Ms Sandy Chua, 24, a homemaker who won Miss Singapore Universe 2004, said: ‘I think they (the netizens) are being too harsh. We should give our winners our support. After all, they are representing Singapore.’

As I have reiterated previously, the ladies in Singapore are not the only one who are getting into…
byalvinology 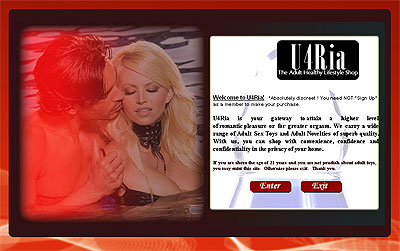 A reader emailed me about this Singapore online adult store, U4ria (NSFW) which sells sex toys targeted at…
byalvinology 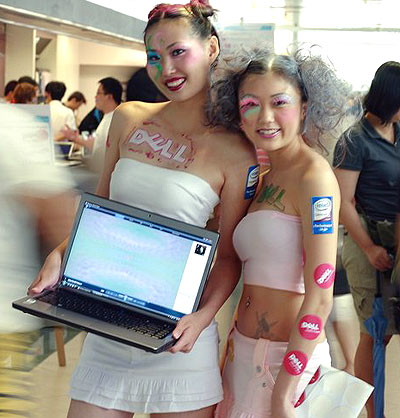 Via EDMW. Dell‘s definition of beauty as exemplified by their choice of showgirls to showcase their laptops at…
byalvinology