I shall let Rachel blog today on her proud sandwich creation 🙂 :

We’d eaten a whole of lot of deep-fried junk food during our Taipei trip, and Alvin was absolutely dying to eat some homemade goodness. Nevertheless, I tend to spend a tad too much time and effort making a meal for two, so we decided that a sandwich was best. 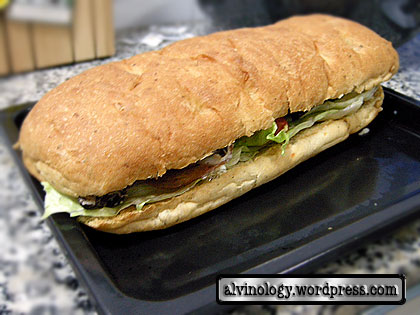 Of course, though we shopped for the groceries together, I was the one who made the sandwich, inspired by the efferverscent Jamie Oliver. Nice pictures, though, Alvin. 😉

Switch on your oven and start to pre-heat it.

Place the frying pan on a medium fire, heat a dash of olive oil until it barely starts to smoke. Toss in the mushrooms and sprinkle on some salt and ground pepper once they are nicely coated with the olive oil. Slide in the ham slice by slice, and make sure they lie flat underneath the mushrooms.

I forgot what kinda ham we bought, but it doesn’t really matter as long as it can stand up to cooking. You can substitute the ham for bacon.

Once they begin to curl, flip them over. Throw in the tomatoes when you’re pretty sure the ham is ready. Roll the mushrooms and the tomatoes around in the pan.

Crack your eggs, careful not to break the yolk, and dribble them into the pan from the sides. Turn down the heat to low. Do not toss around the pan anymore. Let the pan remain on the stove until most of the egg whites are cooked. Transfer your pan to the oven and let the yolks cook until desired. 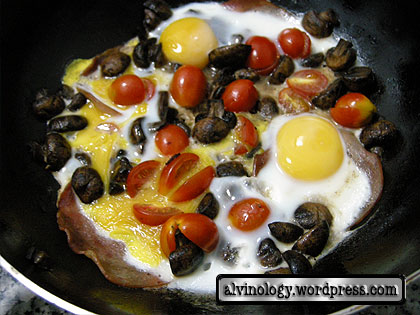 The eggs are still runny – back to the oven it goes

At this point, start preparing the bread. When slicing it, be sure that the bottom layer is thicker than your crust, so that the sandwich won’t be easily soaked through by the filling.

Arrange the cheese the way you want it and pop these into the oven when the eggs in the pan are done. I didn’t time how long the bread was inside the oven, but the cheese has to melt and the bread should be just crisp on the outside and soft inside. 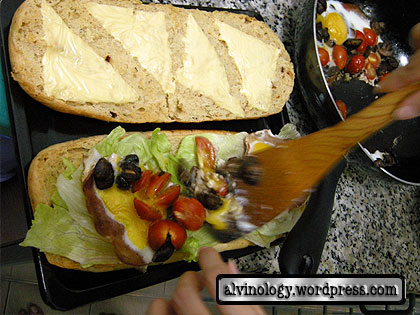 Then you arrange a few leaves of washed and dried lettuce on the bottom layer and dole on the stuff from the pan. Alvin’s sis didn’t want any cheese on her white bread, so note that two slices of cheese are just enough for two. One foccacia loaf serves two. 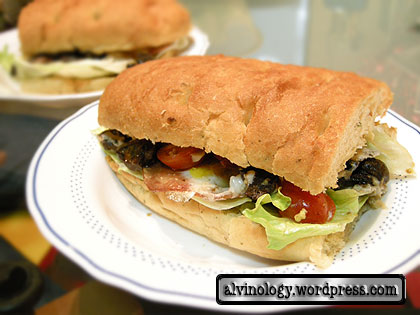 It’s good to have some extra bread handy so you can mop up any remaining gravy in the pan. It’s all nutritious and your pan will be easier to wash later. Forget about flying all the way to London for Burger & Lobster. Now you can get your hands…
byCarrie Er 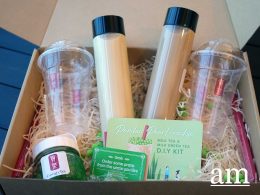 Today is National Bubble Tea Day and to celebrate the occasion, Gong Cha and Grab has launched 200…
byalvinology

From the Pahang highlands to the top of Mount Faber, One Faber Group presents the first-ever “Mao” Faber…
byIrone Kim
Hello. Add your message here.
See how Snapask has been helping out over 3 million students around the world. Find a perfect plan