With a month to go before the most exciting racing on water makes its Singapore debut, organizers have announced a new ticketing category for the Singapore Sail Grand Prix – SailGP Beach Club – to ensure you get to enjoy the high speed, adrenaline-pumping races in a chic lounge setting right on the beachfront.

Located on the beach at Parkland Green, East Coast Park, you can enjoy a completely new vibe to watch the battles on the water play out in front of them. With an unobstructed view, gazebo shading, dedicated screens, an all-inclusive food and drinks package and a live DJ, it is the ultimate place to experience the fast-paced action.

If you want to get even closer to the race action, you can also purchase the ‘Bring Your Own Boat’ package and get the best (and closest) views of the action. The package includes access to both race days, front row views near the finishing line, live race commentary over VHF, a souvenir flag, and beverage coupons to use after the race.

Other ticketing options to the two-day race weekend include Waterfront Access which offers entry to the official spectator area providing great views of the racecourse, along with a live TV broadcast on big screens and race commentary. All ticket options are in the heart of the SailGP Race Village which is also filled with SailGP merchandise booths, food and drink outlets, and activity stations.

Teams from Australia, Canada, Denmark, France, Great Britain, New Zealand, Spain, Switzerland and the United States will compete for points in a series of fleet races held over two days. The three teams with the most points after the fleet races will then compete for the overall Sail Grand Prix Singapore title in the event final on 15 January.

SailGP is known for achieving gender equity at the highest level of the sport. Key to this was the launch of the Women’s Pathway, two years ago, to fast-track women’s training and development and realize an inclusive sporting championship where the best athletes have equal opportunity to compete together. The Pathway outlines that all teams must have a female athlete racing in both four and six person crew configurations.

As part of its mission to be the world’s most purpose-driven and sustainable sport and leave a legacy at every venue it visits, SailGP will also deliver a Champions for Change event on the eve of the Singapore Sail Grand Prix.

Champions for Change is SailGP’s exclusive thought leadership program that brings leaders and sustainability advocates together to talk about their approach to the climate crisis and share valuable learnings.

Local students will benefit from SailGP’s dedicated community outreach youth program, which has inspired over 10,000 young minds across the globe since its inception. Over the course of the week, students from St Hilda’s Primary School, Endeavour Primary School, Hwa Chong International School, Overseas Family School and the Singapore Sailing Federation will get the chance to learn about the sustainable side of the sport and get insight to the work SailGP is doing, as the first climate positive sport and entertainment property.

Overseas Family School, which runs a daily after school sailing program, has also partnered with SailGP Inspire as the Program’s Official Education Supplier, helping to support the program and deliver bespoke activities in the Race Village for the public to enjoy.

Each school has been paired with a SailGP team, who they will get to meet during an exclusive behind the scenes tour. Attending students will also engage in activities which are linked to harnessing power from nature’s key elements – wind, water, sun, and earth. They will learn to build wind turbines, challenge the concept of buoyancy, and be introduced to foundational sailing techniques.

As part of the Inspire Careers program, up to 25 local youth will have the chance to work and learn onsite, and 16 talented local sailors will be selected to join the Racing program and sail on the WASZP – a fast-paced hydro foiling dinghy.

This program is aimed at providing a pathway from youth sailing to professional F50 racing and the winners in Singapore will get the chance to represent their country at the WASZP Grand Final in San Francisco. Winning a place in the Grand Final presents an opportunity for these young sailors to join one of the SailGP F50 teams and see what it takes to become a professional athlete.

Visit here for further details of all ticketing options and to purchase tickets. From 1 August to 30 September,  Universal Studios Singapore offers a $52 discount on a bundle of 4 adult…
byStaff Writer All-you-can-eat buffets are great, but here’s a buffet with a twist – one that indulges your need for…
byKaryn Cheong 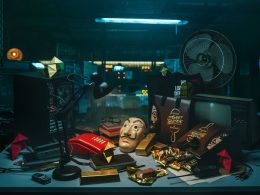 Get your hands on the limited-edition Magnum x Money Heist merchandise; new AR filter is available on Instagram as well

Magnum partners with famed Netflix series, Money Heist to bid a sweet goodbye to La Resistencia in its…
byIrone Kim
Power up your child's learning with Geniebook.
Sign up for free demo
This is default text for notification bar
Learn more