This Halloween, Resorts World Sentosa will roll out fun programmes which are family-friendly and suitable for all ages.

At Universal Studios Singapore’s Trick or Thrills programme, the whole family can meet Illumination’s Minion Monsters and Gru’s Girls, as well as your favourite stars from DreamWorks Animation’s Madagascar, and join all-new characters like the Sweet & Sour Squad in an exciting park-wide procession.

You can also groove along to DreamWorks’ Trolls at their rock show and take Halloween snaps with Sesame Street friends.

Making their first-ever appearance at Universal Studios Singapore is the Sweet & Sour Squad, who are exclusively employed by “The Creator” to work in his candy factory. The wacky Squad have made too many delicious treats and Universal Studios Singapore is their next stop to share them. Join in on the Squad’s extravagant park-wide procession and don’t miss out on collecting their sweet creations!

Once a day, kids can also catch the Squad during a mass meet and greet with Illumination’s Minion Monsters and Gru’s Girls – Margo, Edith and Agnes – as well as Madagascar’s Alex, Gloria and King Julien in Hollywood.

Arrive in your best Halloween costume and stand a chance to win attractive prizes.

DreamWorks’ Trolls are making a rocking comeback this Halloween – join Poppy, Branch and Guy Diamond as they team up with rock n’ roll power duo, Electra and Roxy, in an electrifying show at Mel’s Diner Stage.

Kids can snap photos with the band at the end of their set and grab treats too.

Sesame Street fans can get their cameras ready for some fun snapshots as they wander through the gang’s Fortress of Fun. Catch Oscar, Abby, Big Bird, Cookie Monster and The Count, who will be dressed to impress in their Medieval best in New York.

The daytime Halloween activities are included with regular admission to Universal Studios Singapore. Families can opt for the Fun Frights Family Package at S$268, which includes admission for two adults and one child, Halloween Set Meals and retail vouchers.

In addition, you can continue to enjoy the adrenaline-infused rides, world-class attractions and entertainment in the theme park. Learn more here.

The habitats of the marine animals at S.E.A. Aquarium will morph into spooky Undersea Neighbourhoods this season.

Immerse in the exciting atmosphere and hop on a fun-filled Trick-or-Treat Trail around the aquarium to uncover spooky secrets of the neighbourhoods, learn quirky facts about marine animals from the adorable Count Mobula – an animated manta ray donning a cape, and test their knowledge in the complimentary Scare-arium Fun Sheet.

Candy Ambassadors will be giving away sweets while they pick up interesting bite-sized facts about marine life.

Divers in skeleton costumes will also get guests into the Halloween spirit as they make an appearance in S.E.A. Aquarium’s centerpiece attraction, the Open Ocean Habitat on Mondays and Fridays.

Catch the divers feeding the magnificent manta rays, pickhandle barracudas, and other fishes at 4:15 PM on Tuesdays, Saturdays and Sundays. S.E.A. Aquarium’s manta ray mascots will be all decked out in Halloween costumes for Meet-and-Greet sessions on weekends, the September school holidays and Deepavali.

Enjoy S.E.A. Aquarium’s marine-themed family-friendly Halloween fun with the Deep Boo Sea package at S$51 per adult and S$41 per child. It includes an adult/child one-day admission ticket, a S$8 meal voucher and a S$8 retail voucher for use in S.E.A. Aquarium.

The Deep Boo Sea package for children (ages 4 to 12) also comes with a complimentary pumpkin felt bucket to fill with sweets they get from the Candy Ambassadors. In a report by Alvinology, we reported the accusations levelled against Daryl Aiden Yow by various media outlets,…
byDanielle Ann 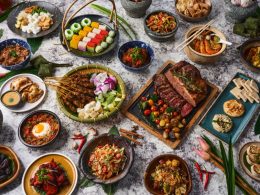 Carouselland is back for a 2-day event this August!

Singapore’s largest indoor marketplace bazaar – is back this National Day weekend, bigger and better! With the theme…
byDanielle Ann