Much like Zootopia with its strong emphasis on inclusivity and diversity, Encanto is a very woke film, suitable for today’s very woke audience. Much care was taken to ensure the characters come in different shades of skin tones and take all shapes and sizes from skinny to chubby to muscular.

Gone are the days when movie studios can get away with white-washing everything.

The lead, Mirabel (Stephanie Beatriz), is the only one in her family who does not any magical ability, but yet is the one who saved the day through a family crisis.

Set in Colombia, Encanto was able to stunningly showcase the vibrant culture of the country, through detailed presentations of their embroidery wears, beautiful flowers and colourful everything.

The songs were really catchy like those in Moana and made use of Colombian instruments and influence to inject more atmosphere.

Released during Thanksgiving, Encanto is that kind of wholesome Disney movie that is suitable for the whole family during the holiday seasons to foster a sense of togetherness and kinship. If you are searching for a family movie to watch to round up the year with your loved ones, this would be it.

There is no villain in the movie and as a result, it may appear a bit draggy at some point as there is no good-versus-evil story arch to build up the suspense and tension. Much of it is introspective on Mirabel’s part, searching for her identity in this world and also her role in her own family of overachievers.

For a computer-animated film, Mirabel could have been easily constructed as a perfect-looking Disney princess with perfect features, but instead, was constructed to look perfectly ordinary, with curly hair, a normal build, and a roundish face. This I like.

Columbia has been unfairly portrayed dominantly in the movie world as a very dangerous, drug-fueled, and violent place, through movies like City of God and drama series like Narco. Encanto brings a different perspective and is a breath of fresh air for us to understand another side of Colombian culture.

Encanto is now showing in Singapore cinemas. Go catch it! Congratulations, AirAsia and Tony Fernandes! AirAsia has been named the World’s Leading Low-Cost Airline for the fifth year…
byDanielle Ann 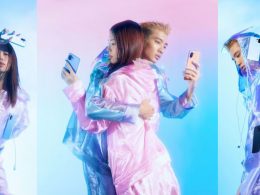 Singaporeans love their smartphones. There are no doubts about it. According to this survey from all the way…
byCaymen Tan