36-year-old Somasundram Pathumalai was caught by checkpoint officers at Woodlands with six puppies and a bird under the third passenger row of seats in his vehicle.

The animals were sick and dehydrated, with the bird bound distressingly in plastic. The animals eventually died in quarantine, and Pathumalai was jailed for six months by a Singapore court.

What happened to the smuggled puppies and bird?

The plan to smuggle the animals hatched around mid-March in 2020, where Pathumalai arranged and planned the budding smuggling operation with a man called Subramaniam Ellan, according to a Yahoo report.

The report said that Pathumalai, a Singaporean, arranged to rent a car and bring the animals in on that rental, in exchange for $500. He would ultimately arrange the smuggling of the animals with Subramaniam’s brother-in-law, Jeevan Arvoon. The two other men involved in the case have not been dealt with by authorities.

Court records showed that the operation was more complicated than simply bringing the animals over the border. Pathumalai, in his rental car, would then meet Arvoon at Woodlands checkpoint. The smuggler was instructed to wait for Arvoon at a petrol station after Malaysian immigration clearance.

There, Pathumalai gave Arvoon control of the vehicle, and the man picked up the puppies and the bird from different locations. He received two German Shepherds and four Great Danes along with a White-Rumped Shama from Arvoon.

What about the pet ‘mystery boxes’ that killed several animals in China?

After receiving the animals from all their stops, they then went to a pet shop in Johor Bahru where the puppies received sedative shots. The bird was wrapped in a plastic tube as well. This was where they were put under the third row seats with the sedative lasting for roughly an hour.

Arvoon then told the Singaporean to wait so he could check which lane was the best for smuggling their live cargo. Pathumalai, however, did not follow his instructions and instead set off on his own with the animals hidden in his rental vehicle through the checkpoint. He also ignored Arvoon’s call when he was at the checkpoint. The officers discovered his smuggled cargo and arrested him.

The arrest happened on March 14 at around 3:05 in the wee hours of the morning, which seemed to be chosen so the vehicle would have higher chances to get through with the animals undetected.

How bad was their treatment?

The same report said, “The compartment the animals were hidden measured 77cm in length, by 31cm in width, by 12cm in height, with a support structure which reduced the space available. The six puppies each measured between 28cm to 36cm in length, and between 19cm to 24cm in height and about 10cm in width.

“The bird was placed in a hollow plastic pipe of 4cm diameter, with its tail feathers exposed at one end. Cable ties and a stick was used to block the ends of the pipe to trap the bird.”

The conditions were so bad under the passenger seat that coupled with the sedation, the puppies were suffering, and had possibly choked on their own saliva.

Between 25 and 30 March last year, the three Great Dane puppies and one German Shepherd puppy died during quarantine. On 23 April last year, the bird died while in quarantine as well. The conditions in their transport were simply too much for them to endure and they never recovered. Join us at the Marvel Fans Assemble Day on 13 January 2018 at Madame Tussauds with the Singapore Cosplay Club!
byStephanie 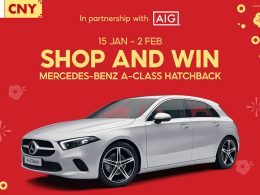 Mark your calendars for the Shopee 2.2 CNY Sale on 2 February and get ready to call dibs…
byIrone Kim Come September, you can attend the Sandsational Fun at Sentosa event! From 1-17 September, the island’s Siloso Beach will…
byStaff Writer