It’s six months reformative training for Ng Jia Sheng, who fractured their family maid’s nose with a metal mug and verbally abused her for being poor and a domestic helper.

The domestic helper has since gone home to the Philippines.

Who is Ng Jia Sheng?

According to a report by The New Paper, Ng Jia Sheng pleaded guilty in June 2020 to causing grievous hurt by performing a rash act and using criminal force on their family maid, Estabillo Soledad Agustin. The incident mentioned in the case happened in 2018.

He also plead guilty to using insulting words on the 41-year-old Philippine national.

At the time of the altercation, Ng was eighteen years old.

Reports said that the altercation happened at the Ng family home in Bukit Timah on Greenwood Avenue in June 2018. Agustin was employed by the convict’s mother.

Ng asked Agustin to turn on the airconditioning unit, to which she replied in an “irritated manner.” Ng got angry at her disrespectful reply. Agustin also threw the controller on the table after complying with his request.

After that, the two argued, and exchanged pointed words through shouting at each other. At the height of the argument, Ng spat at the victim, who retaliated in kind. Ng also said that the victim was, “Only a maid, was poor and had no right to be in Singapore.”

The father of the household then intervened in the argument, and Agustin went into the kitchen. Ng, however, followed her, picked up a metal mug, and threw it at her. The mug struck her face, and gave her injuries that needed a trip to the hospital.

Take a look at this skit depicting Filipina domestic helpers. Do you think it’s accurate?

A report by The Straits Times showed that the mug hit her cheek and her nose.

Agustin retaliated, though, and also began to throw objects at Ng as well, but none of these landed on him. She managed to throw plastic medicine bottles and a plastic jug. Ng’s brother also eventually restrained her.

After the violent altercation, Agustin asked another domestic helper to call the police. She was taken to Tan Tock Seng Hospital later, and a doctor declared that she had multiple face inuries that included a nose fracture.

What happened to Ng?

He is out on $10,000 bail and is set to surrender on November 20 to begin his sentence. Since Ng was only 20 at the time of his sentencing on September 1, he was eligible for reformative training.

The training was said to include a strict regimen everyday for the whole duration, which would include foot drills, and counseling.

His insults could have also caused him to be jailed for up to six months with a $5,000 fine. 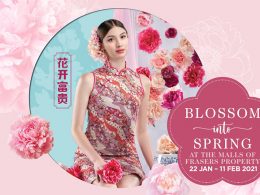 [LUCKY DRAW] Participate in Frasers Property’s CNY Lucky Draw and win a share of $18,000 worth of Digital Gift Cards!

The malls of Frasers Property are celebrating the season of new beginnings through its “Blossom into Spring” campaign,…
byIrone Kim

My son Asher is 6 years old this year and has been on at least 8 cruise trips,…
byalvinology Years of drinking coffee has left my teeth stained. It bothers me and I have tried using whitening…
byCarissa Wong