In a single day, Singaporean authorities and citizens had to handle three separate suicide-related incidents–with one unnatural death and two men attempting to jump from buildings reported on July 24.

What happened with the unnatural death?

According to a Singapore Police Force statement, a 37-year-old Indian worker was found dead at the scene at 512 Old Choa Chu Kang Road. A paramedic confirmed the man’s status. Police are still investigating.

The embassy, as well as the Ministry of Manpower have notified and extended assistance to the man’s family. The man’s employer and Migrant Workers’ Centre are working with authorities to help as well.

The Singapore Police Force were also alerted to a worker three hours after the first incident, who needed assistance at 506 Old Cho Chu Kang Road.

The Singapore Police Force told media that a 19-year-old man was apprehended. He was allegedly violating Section 7 of the Mental Health Act.

Video of the incident went viral in with Singaporeans, where two people came up behind the man who was standing at the edge of a building. They swiftly pulled him off the ledge.

Another incident at 29 Senoko South Road happened when a Chinese worker was caught on camera standing on a metal railing. The man was brought to safety thanks to the dormitory manager and was said to be stable.

One more incident was recorded at S11 Dormitory @ Punggol, where another Chinese worker climbed up to the fourth level of the dorm and threatened to jump off.

The authorities were able to get the man down then called the latter’s employer.

Investigations revealed that the Chinese migrant worker wanted to go home and had purchased a flight ticket using his own money. When he did not get permission from his employer to return home, he became upset.

The man had stayed in a dormitory block that had been cleared on July 4 and could have been able to leave if he and his employer had discussed the matter.

“However, both parties did not discuss this, leading to a dispute,” MOM said.

“The employer was advised to facilitate the worker’s return and complied. The worker will leave Singapore today,” MOM added in its Facebook post yesterday.

The man was allegedly unable to obtain his passport, according to another migrant worker who knew of the case.

What did netizens have to say about the incidents?

Some netizens have mentioned that they expected Minister Josephine Teo to issue a statement about the attempts, but only the official MOM reports were seen.

Netizens have made their opinions known about the sudden spike in these attempted suicides on popular Singaporean forums. Here’s what they had to say:

Some expressed difficulty understanding why workers would harm themselves even if they were paid and their needs were provided for.

Others asked the same thing, unaware of the mental health problems a lot of the workers go through. Top Blog: Getting to Know Daniel Ang from DanielFoodDiary

In our interview series Top Blog, some of the top bloggers in Singapore share with us their blogging journey you’ve always…
byCarrie Er 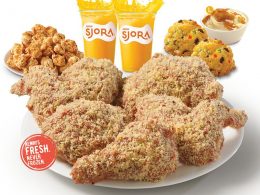 Specially for the festive seasons this year, Texas Chicken has launched a new “Naughty and Nice” Christmas menu,…
byalvinology