Given the restrictions on physical campaigning, GE2020 will go down in Singapore history as the first ever General Elections fought so heavily in cyberspace. And what’s cyberspace without social media? Here are some thoughts on how the general election has played out on social media thus far:

Two police reports were made against Workers’ Party’s (WP) Sengkang GRC candidate Raeesah Khan, 26,  over the weekend in relation to two Facebook posts she had made in 2018 said to allege police discrimination against minorities.  She apologized on Sunday (5 July 20) and said that said she did not mean to cause social division, but had made the remarks as she wanted to raise awareness about minority concerns. Workers’ party has stood by her, with Secretary General Pritam Singh saying that he does not regret fielding her as a candidate.

In response,  the PAP on 6 June 20 asked WP to state their position on Raeesah Khan  and for Khan to “make public” her other social media posts which “were previously public” to “allow voters to make a clear assessment of her views, and her suitability to be elected into Parliament.”  As of the time of this article, WP has yet to respond.

Could this- i.e. past social media posts being surfaced and reported-  be a recurring issue we will see in future elections?  Candidates are getting younger and younger (This GE’s youngest candidate is only 23 years old, law undergrad Choo Shaun Ming of PSP), and increasingly belong to the social media native generation that documents almost their every thought and move on social media. How would such public records of the lives and thoughts of future candidates stand up to scrutiny under the magnifying glass of the general election?

2. Social Media as an Amplifier for Sentiments-  Ivangate

The Ivan Lim saga needs no introduction. This was the first time a social media firestorm took down a GE candidate. A few social media posts alleging unbecoming conduct on the part of Ivan Lim, made by individuals who identified themselves, snowballed into a firestorm- an unnecessary distraction from serious issues that was only quelled by Ivan Lim withdrawing from the GE.

Ivan Lim has denied any wrongdoings and PM Lee has said that investigations into the claims made against him would be done after the election. Nonetheless, many are taking Ivan Lim’s bowing out as an example of a win for people power-  social media has amplified the people’s voice.

Jamus Lim, WP Sengkang GRC candidate became the blue-eyed boy of netizens overnight after the general election’s first televised debate on 1 July.  You can find out more about him in our previous feature on him here.

Enterprising fans even made Famous Jamous tee shirts for sale.

And of course, how can we not mention the hypebeast Ah gong Dr Tan Cheng Bock!  Dr Tan impressed many by his earnest efforts to connect with the younger generation on social media. Even his opponent in West Coast GRC, S Iswaran, coincidentally also the Minister for Communications and Information, praised Dr Tan Cheng Bock’s use of  social media as “savvy”.

Memes totally flooded the local social media posts, forums and the Internet. Candidates from different parties have all provided much fodder for the internet meme brigade. We see memes as integral to the internet culture of entertainment, and in general are not malicious but for lighted-hearted fun. Here are some we came across:

Masagoes pledging allegiance to the wrong Mr. Lee as the Prime Minister:

Who doesn't love a blooper? Hear no evil ?

Unsatisfied by the hearts, thumbs up and various emoticons that you can send over your favourite politician’s Facebook live or Instagram live videos? You are not alone.

Many Singaporeans look forward to the once-in-five years’ experience of seeing normally reticent and reserved Singaporeans exhibit chest-thumping support for the political party/ figure they support.

Videos of passionate chanting by supporters, reminiscent of the heady atmosphere at rallies, have been going viral on social media. Younger voters among us who have not experienced the atmosphere at physical rallies, can get a “lite” vicarious experience from the videos.

That said, the elections department has since advised for political parties and candidates to refrain from shouting or chanting party slogans during campaigning walkabouts. This is to avoid compromising safe distancing measures and also to prevent any potential confrontations.

You can check out the fun you missed below.

A shouting match between supporters of the PAP and PSP at a coffee shop in Block 747 Yishun:

Another shouting match at a Nee Soon Coffeeshop:

Another big part of the fun of attending rallies was in spotting the creative ways some people showed their support. An interesting GE character who frequently made the news past GE seasons is Christopher Pereira. He is known for carrying a life-like figure of Lee Kuan Yew on his back and also for making models of other political figures including Low Thai Khiang and Dr Tan Cheng Bock.

Not to worry, even without rallies, people have still been showing their support in other creative ways:

A rally participant wrote in 2015.“The atmosphere was festive and carnival-like. Some had seized the chance to set up stalls selling muah chee, fishballs and even illuminated light sticks.”

NOW: More than one online store has started selling tongue-in-check apparels inspired by the GE2020 hustle and bustle.

Social media has facilitated increased visibility of political discussions and comments from diverse individuals. The quality of the posts varies across a spectrum, from downright fake news to troll posts with some kernels of truth, to high-quality thought-provoking pieces.

Hwa Chong Institution issued an advisory to their students to refrain social media posts on the election. This ignited debate among many who felt that the school’s advisory was draconian. Since social media is here to stay, the young should learn how to navigate the medium and contribute to constructive conversations on it, rather than refraining from it.  Many alumni also publicly expressed disappointment with the school’s move.

A frequently cited advantage of online campaigning is that we can now access and assess the information from the various parties at our own time. For example, we can watch the political broadcasts long after the live streaming has ended. The question is, will you? A huge part of the advantage of the accessibility of information online still depends on how willing one is to be exposed to different opinions.

“Our brains are prone to turning complex ideas into easy-to-understand tidbits, and social media capitalizes on that…today’s information overload seems to encourage our worst impulses: tribalism, insulation, and favoring the quick, digestible version of “truth” over claims that require due diligence.

We’re exposed to so much information that digesting and remembering only the most succinct and appealing snippet—say, a misleading headline—becomes second-nature.” Julia Shaw, a psychologist and author of The Memory Illusion

It is too easy to be caught up in our own bubble online. The opposing side’s arguments can easily be taken out of context and reduced into memes. How many of us will make the effort to check out the full argument and context behind the memes and soundbites?

Birds of the same feather flock together. It is only natural human tendency to associate with like-minded people and to seek information which fits in with our views and support our beliefs. Social media exacerbates this as we form echo chambers online. We need to make a conscious effort to overcome this tendency.

Regardless of your political affiliations, have you followed the other side(s)’s social media accounts? Hear straight from the horse’s mouth. Check out their political broadcasts and follow their social media pages

It takes a lot to stand for election. All the candidates have no doubt put in a lot of effort and sacrifices. The least we can do is to hear from them directly before we cast our vote.

What other thoughts do you have on social media and this GE? Let us know in the comments below! 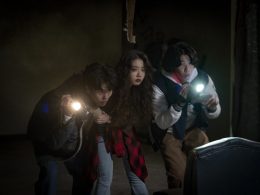 It has been a long while since I went to the cinemas to watch a horror movie. The…
byalvinology