After being filmed verbally abusing a security guard on October 27, a Whampoa condo owner who referred to himself as Ramesh has filed a police report against harassment.

JP Morgan has started looking into the matter of their allegedly verbally abusive employee.

According to a report by TODAY, police have confirmed that the report has been lodged, even as the security guard who received the verbal abuse from Ramesh had filed his own.

A viral video showing the man named Ramesh speaking harshly to a security guard in the Eight Riversuites condominium went viral, saying that he had paid $1.5 million for his condominium, and that the security guard was harassing his guests.

He also said that the security guards had ruined the Diwali festivities he was having in his condominium with what they did.

The security guard said that they were only enforcing the condominium rules.

Here’s another banker, Jeremy Khoo, who said something bad about a customer on his social media account, of all places.

A later comment made by the Ramesh on Facebook showing the viral video said that his guests were allegedly being harassed by the guards. The guards kept asking what time the guests were leaving, and that Ramesh had to pay $10 per guest for the parking spots they had occupied.

When the video went viral, netizens sided with the security guard, who remained calm under Ramesh’s tirade. As the story continued the next few days, people have begun to post publicly-available information on Ramesh, including his school history, work history, and his current employment.

As Ramesh was a banker working for JP Morgan, netizens commented continuously on the company’s Facebook page. They asked the bank to sanction their employee for his behaviour towards the security guard.

Most of the comments would have been scene by JP Morgan international clients, as the company’s page is for their global brand.

When The Straits Times asked JP Morgan about the matter of their employee, Ramesh, they simply said that they were looking into it.

They then issued a vague statement that did not refer to the incident at the condominium or Ramesh at all, but instead asked employees to be respectful at all times.

According to TODAY, the internal note that it sent to its staff said that the company, “expected to demonstrate the highest standards, including respect and dignity for others, in our behavior and actions inside and outside of the workplace”.

It also reminded the employees that all of them have a “shared responsibility for preserving and building” on the company’s “strong reputation”.

Netizens have despaired of these reports, saying that the whole incident may not be recognized by the company.

Will someone be jailed for doxxing now?

While no criminal has ever been convicted for doxxing under the Protection from Harassment Act or POHA, some lawyers in various Singapore firms have commented that the law requires that the intent be established to cause distress, harm, or to harass the doxxed individual.

Even if the information that was published was publicly available, the report from TODAY said that the case may still viable, but that the public nature may also be used by the defense.

We are bringing you live updates from Munich, Germany, where Huawei held its Mate 30 Series Global Launch…
byRuth Y

[email protected] Photo Contest: Celebrate Harmony at Work and stand to win over S$3,000 worth of cash prizes

The annual [email protected] Photo Contest is back for a third year! If you haven’t heard of it, the…
byRachel Chan 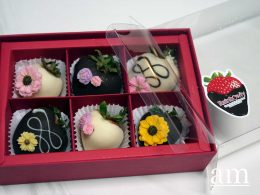 The gifting of flowers for special occasions never fails to bring a smile to the recipient’s face. If…
byalvinology

Everyone grocery shops. It is a fact of life, like how the Earth is round. Whether you are…
byGuy