DJ Tenashar is more popular now thanks to her jail stint

After serving eighteen months in jail, Model-DJ Debbie Valerie Tenashar Long says that being behind bars has actually helped her career in more ways than one.

A report from The Sunday Times says that the elite DJ was once a high-flyer and used to staying in five-star hotel and taking first class plane rides to her next gig. Going to prison was such a wake-up call for her, she said, where she had no choice but to withstand harsh conditions in Changi Women’s Prison, or at the very least, conditions that were so different from what she was used to.

DJ Tenashar was found guilty of consuming drugs overseas, and had attended her trial in MArch but skipped out on her bail, where she was only arrested when her passport expired and she was forced to return to Singapore.

Her case was tied to her boyfriend at the time, Jamie Yeo’s ex-husband Mr. Thorsten Nolte, who is still at large. Case details mentioned that they did not return as promised when they had posted their bail.

Who is DJ Tenashar?

More popularly known as DJ Tenashar, Debbie Valerie Tenashar is a 33-year-old disc jockey who may be even more famous than current hot DJ mom Jade Rasif. Her short jail stint, though, may have removed her from the limelight but now that she has been released, she can quickly get back to her gigs that include both international and local events.

According to a report by The Straits Times, Debbie was once an FHM Singapore cover girl, and was the only Singaporean to appear on the  on the DJ Mag top 100 list. Aside from international gigs with other artists, she also had a thriving online store for her merch.

A report in the Sunday Times has mentioned that Debbie has experienced quite the renaissance when it comes to her career, with people viewing her stint in jail as adding to her ‘street cred’. The report said that producers and event organizers have expressed interest in working with her. She said that these personalities have become even more interested in working with her after her release. She thinks that she seems more interesting as a celebrity not what she’s actually been in jail.

Could the return of DJ Tenashar give DJ Jade Rasif pause or is Singapore big enough for two hot model-DJ’s? 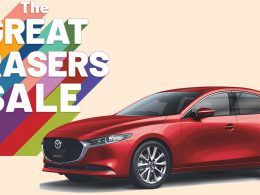 The Great Frasers Lucky Draw is back! This time with a sleek new Mazda 3 as the grand prize! Here’s how to qualify –

The newest arrivals in Singapore Zoo are a bit of an enigma. The fossa looks like a cat,…
byIrone Kim Heard of Bus Uncle, the crazy Facebook messenger chat bot that tells you bus arrival timing in Singlish?…
byAsia 361
Power up your child's learning with Geniebook.
Sign up for free demo
This is default text for notification bar
Learn more