This man is the most disgusting human being in Singapore

An unnamed man was recently sentenced with the maximum amount of caning (24) and a 25-year jail sentence for crimes that have shocked Singapore.

In a report by Channel News Asia, a 27-year-old man was given such a sentences for the monstrous crimes he had committed against his wife, his daughter, and niece.

The report said that the unemployed father admitted to molesting his own daughter and niece along with prostituting his wife. He made his 6-year-old daughter perform sexual acts while his 13-year-old niece was molested by him in a hotel room.

A psychiatrist working on the case noted in their report to the court that this horrid father was proud and boastful of his sexual prowess and everything he did to his wife and daughter.

What did he do to his wife?

Prosecutors of this case declared that what the man had done to his wife was unique in Singapore, and that this was the first case where a husband became the pimp for his own wife, who was prostituted against her will.

The abuse his wife experienced started when they were still dating. They were married in 2012, and four years after that, things got worse for his wife. With the birth of their second child, he was unemployed and they did not have enough funds to support their children. She was already working as a receptionist at the time earning $1800.

He ordered her to use her body to earn money to provide for their infant son, who needed milk and diapers. He had even imposed a “quota” that she needed to reach to ensure that her son would be provided for. She tried to ask to get a regular job but he insisted on prostitution as it was more lucrative.

He schooled her in the sex industry, and set up her profile on a website designed to capture customers in the sex trade. He would monitor her “work” and beat her to secure the money she earned and whenever he felt jealous.

In the end, she earned $11,000 after serving 138 “customers.” This happened daily over three months.

What about his daughter and niece?

In 2016, he and his wife were initially living with his mother, but after he had an argument with the latter, he took his family and left. They then lived in Value Hotel Balestier at the time.

While his wife was in the toilet, he had successfully coerced his child who was six to engage in sexual activity. When his wife saw this, she tried to stop him, but he threatened to hurt her and the children.

A few months later, he forced his wife to take her 13-year-old niece to him, even if the girl was taking her PSLE exam at the time. He left the children at the initial hotel, a six-year-old and a baby, to go to a different hotel. There, he waited for his wife and his niece.

The wife, afraid that he would continue to hurt her and the children, bodily forced the niece to come with her. There in the other hotel, he molested the teenager and the wife returned to take care of the children he left.

His own mother reported him to the police after his daughter told her that he had done something to her. Details of the case then emerged, where the court heard that he would also beat his wife when she did not earn enough through her “trade” on that day, forcing her to service more men the next. 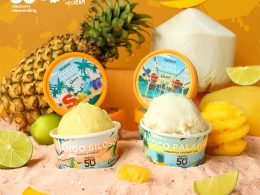 Many of you will recognize the familar names of Sentosa and Udders, with one being a famous local…
byKaryn Cheong

Brush your teeth with an overload of cuteness with the new limited-edition Darlie All Shiny White Sanrio Toothpaste – available on 1 September!

Darlie will be launching two limited edition toothpaste featuring Hello Kitty and My Melody. It is the first…
byIrone Kim