They Shall Not Grow Old is a 2018 British documentary film directed and co-produced by Peter Jackson of Lord of the Rings fame. The film was created using original footage of World War I from the Imperial War Museums’ archives, most of it previously unseen, alongside audio from BBC and IWM interviews of British servicemen who fought in the conflict. Most of the footage has been colourised and transformed with modern production techniques, with the addition of sound effects and voice acting to be more evocative and feel closer to the soldiers’ actual experiences.

The film is Jackson’s first documentary as director and an project close to his heart as Jackson’s grandfather fought in the war. He embarked on the project pro bono and received no payment for it. Jackson’s directorial vision is for the film to be an immersive experience of “what it was like to be a soldier” rather than a story or a recount of events; the crew reviewed 600 hours of interviews from 200 veterans, and 100 hours of original film footage to make the film.

The title was inspired by the line “They shall grow not old, as we that are left grow old” from the 1914 poem “For the Fallen” by Laurence Binyon, famous for being used in the Ode of Remembrance.

They Shall Not Grow Old premiered simultaneously at the BFI London Film Festival and in selected theaters in the UK on 16 October 2018, before airing on BBC Two on 11 November 2018 (the hundredth anniversary of the Armistice of 11 November 1918). It was universally acclaimed by critics for its restoration work, immersive atmosphere, and portrayal of war.

The film is now showing in Singapore exclusively at The Projector from 15 December.

I attended the preview screening last week at the retro-chic The Projector and found the venue most befitting for the screening of a history documentary. For those who have not been to the cinema before, The Projector revives two cinema halls and the 5th floor foyer of the historic Golden Theatre located at the shady Golden Mile Tower at Beach Road and converted them into a hipster enclave for indie and art-house movies.

As the movie is pieced together using whatever available war archive material to tell a story, do not expect a structured narrative here with times, dates or names of the soldiers featured. It is an unconventional presentation for a history documentary and you would definitely marvel at the technical restorations of the source material to bring history to life, right before your very eyes in the theatres.

What lingers in your mind after watching the film is the humanisation of each and every soldiers and players in the war, beyond seeing them as just statistical digits who fought or sacrificed. These men are made of blood and tears like you and I and all have different takeaways from the war, as recounted by their respective audio interviews.

History buffs will definitely enjoy this movie and find Jackson’s innovative presentation of a experiential narrative interesting and immersive. However, for those who are more familiar with Jackson’s Lord of the Rings trilogy, this may be a tad painful to watch due to the lack in story structure. Nonetheless, I believe everyone will still be awed by the technical beauty that Jackson and his team achieved in the restoration of the old archive material to seem as if they were shot with today’s audiovisual technology.

It is hard to decide whether to categorise They Shall Not Grow Old as a documentary; a piece of artwork; or a technical showcase – all things considered, it is a hybrid of all three and definitely worth-watching for serious industry practitioners and film buffs who would like to experience a new innovative way of storytelling. Okayama is a prefecture nestled in the heart of western Japan. Being the prefecture with the least rainfall…
byRachel Chan

Singapore’s Top Searches of 2019 Dominated by Tragedy and Scandals – Yahoo!

What do former Malaysia PM Najib Razak, undergraduate Monica Baey and the Hong Kong protests have in common?…
byIrone Kim 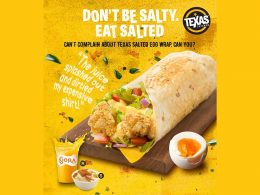 The much-loved Texas Chicken’s Salted Egg Chicken is back this National Day!

Texas Chicken’s Salted Egg Chicken is BACK, for its fourth run, as part of the American quick-service chicken…
byIrone Kim
Power up your child's learning with Geniebook.
Sign up for free demo
This is default text for notification bar
Learn more