Man has shotgun wedding then finds out the kid isn’t his after a year–what should he do?

Talk to anyone in Singapore and they would have different opinions regarding children. Some want them, others are waiting, while some have no plans to have kids at all.

But for one man, the choice was taken from him (happily, though) when his girlfriend said that she was pregnant and that he was the father. The woman’s family insisted that they marry and according to online forum posts, he was very happy with the arrangement. A year later, though, when the child turned a year old, he found out that the child was not his. He received results of the paternity test and some things he remembered from a year ago started to make him think there was something weird going on.

Here’s what the post said, which was allegedly written by a friend of the guy.

So the story goes by this,

The girl told my friend she’s pregnant with his baby he accepted it with joy telling all of us he having a baby and going to marry. Months later they quickly got married, as days go by he do what a father should do supporting the family.

Before the kid’s 1 year old birthday something just click in his mind he started to piece up after that he got the paternity test found out it wasn’t his… the result is less than 1% probability of genetic match. After celebrating the kid birthday he left the house because he lost the sense of belonging in the house.

The girl’s parent just keeps trashing my friend saying thing like he is heartless, worthless, her daughter suay marrying him, he explained himself and ignore all of them.

With a less than 1% genetic match, he and the child are not related at all.

Predictably, he has left the house and is in deep turmoil. Add to the fact that his wife’s family is quick to react negatively, and even said that marrying HIM is an embarrassment, he is now ignoring all of them.

The friend who posted his ordeal on the forum offered to expose the wife, which could lead to answers as to who the biological father of the child is, but the poor husband declined. He has some suspicions but is still unsure. Netizens give their own advice

Singaporeans didn’t waste any time giving their opinion, especially since the OP solicited advice. Here are some examples of the advice and comments that they gave.

Some said that the courts must be dragged into the problem.

While others pointed out that getting another paternity test will confirm the matter, and help the friend make a better decision.

Some outright said to just leave the woman.

Some went further and told the friend what to do if the paternity test returns with the same results.

Others can’t stand what the wife has done.

Others think there is no “friend” and the one who posted this is the one with a problem.

Some think that they can step in if things go awry.

While others say that this is very common and that he should just accept the child as his.

Some offered legal advice, but with only a website as a source. What about you? What do you suggest the husband do now that he’s found out that the child he’s been raising is not biologically his and the wife’s family is treating him badly? 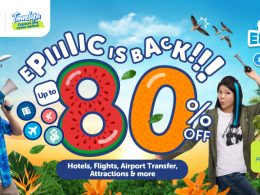 Traveloka EPIC SALE 2022 is giving you up to 80% OFF on travel options, attractions, beauty and spa products and more!

Traveloka announces its EPIC SALE 2022, the company’s biggest promotional campaign offering you EPIC deals of up to…
byIrone Kim A Mexican mojito is a classic, but have you tried an Indian mojito? How about a cyro pomegranate margarita frosted…
byRachel Chan