To sweeten the deal, the sweet corn (or jagung) soft serve is coming back to McDonald’s for just $1.

But the limited edition Big Mac merchandise isn’t so easily obtained for a song. To find out how you can get your hands on the tee, cap and tote bag, you have to keep your eyes peeled for a Big Mac Karaoke Contest on the McDonald’s Singapore Instagram page @mcdsg from 7 to 16 September. That’s all that’s been revealed for now as to how one can possibly snap up this one-off collection.

During the same period, Big Mac fans can also look out for Instagram contest hosted by NYLON and @Alvinology to find out how they can stand a chance to win the Big Mac merchandise and MacCoins.

The MacCoins feature five unique designs which each represent a decade of the Big Mac, pulling in elements from the time in history since the Big Mac was created. The ‘70s showcases the decade’s flower power, the ‘80s alludes to pop art, while the ‘90s is defined by bold, abstract shapes. The early ‘00s specifically focuses on the technology that was at the forefront of the turn of the century, and the ‘10s MacCoin celebrates the past 10 years and calls attention to the evolution of communication.

The Big Mac has become such a global icon that The Economist even used the price of the Big Mac to create the Big Mac Index in 1986, an economic tool that compares the purchasing power of different international currencies year after year. This global connectivity of the Big Mac has inspired the creation of this year’s newly launched MacCoin.

All the best and if you win any Big Mac merchandise or MacCoins, let us know in the comments! 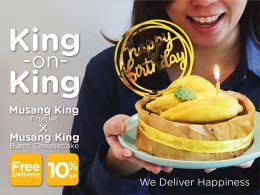 Created for all durian lovers, the King-on-King MSW Durian Burnt Cheesecake features a marriage of the famous Musang…
byIrone Kim