Famous for creating a roster of iconic moments and incendiary characters, Baron Cohen returns to series television for the first time in more than a decade, writing and directing WHO IS AMERICA? In the works over the past year, the seven-episode series will explore the diverse individuals, from the infamous to the unknown across the political and cultural spectrum, who populate our unique nation.

He produced, wrote and starred in the film, which was a worldwide phenomenon opening No. 1 in 24 countries and garnered Baron Cohen a Golden Globe for Best Actor in a Comedy or Musical and an Academy Award nomination for Adapted Screenplay.

To watch a video tease for WHO IS AMERICA?, click here! Singaporeans should DIY more so queues can move faster. Agree?

Wished that queues at the supermarket/cinema/MRT station would move faster? That it would be easier to find a…
byRachel Chan For Singapore residents, now we can consider traveling to Guam in the United States from Singapore at a low…
byalvinology 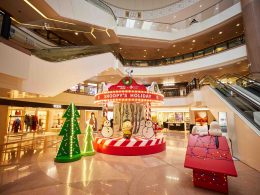 Snoopy’s Holiday @ Harbour City – experience exquisite Japanese crafts and a staycation in the Oriental Kyoto Ryokan with Snoopy and Friends!

This Christmas, Harbour City transforms into a “Christmas Terminal” to greet everyone to embark on a Christmas journey.…
byIrone Kim All you foodies out there, listen up! Tsuta, the world’s first Michelin-starred ramen eatery, has launched 2 new…
byKaryn Cheong