Guy proposes with KPOP dance moves at Sentosa but sadly gets rejected!

Recently, a thread on Hardware Zone’s EDMW Forum showed videos of an elaborate K-Pop dance cover at Sentosa which unfortunately led to a failed proposal.

The video starts off with 7 teenage girls and 1 teenage boy doing a dance cover of K-Pop group BLACKPINK’s As If It’s Your Last in front of the Lake of Dreams at Sentosa.

After finishing the dance at around 3:33, the male dancer starts taking action while the girls surround him and one of the dancers (his supposed girlfriend). The girl seems to suspect that something is up and is corralled by the other dancers to face the boy. He then holds both her hands and pulls her towards him while the dancers and a forming crowd looks on. The end of the video shows the girl accidentally knocking over a passing young child in her haste to get away from the scene. The little girl on the floor starts crying in shock and the two dancers rush to her aid while the other dancers leave in the opposite direction with the dejected boy. With the crying little girl being carried away by her bemused mother, the 2 dancers then head in the direction of the girlfriend and seemingly chase after her as well.

Forum users on Hardware Zone speculate that the girl in question could be Kylie Ng Siew Zhen, who had gone viral a while ago. This is due to the video appearing on a Facebook post linked to her.

There have been a range of reactions by forum users.

Some expressed sympathy for the guy as he seemed extremely crestfallen when the girl rejected him.

Others were suspicious of the entire set-up and accused the video of being fake and scripted. They felt that the performance may simply have been an attempt to go viral or gain views.

Some netizens sided the girl and criticized the boy for going public with the proposal, reasoning that the girl might not have enjoyed such a huge audience and that he could have chosen a less pressurizing way to propose.

A group of forum users were indifferent towards the proposal and mostly indignant that the girl had not bothered to look back even after knocking over the clearly startled small child.

In any case, this proposal is nothing compared to this crazy over-the-top proposal at last year with fountain, lasers, a video of Singapore’s Prime Minister Lee Hsien Loong and more. Coincidentally, the proposal took place at Sentosa as well.

What do you think of this? Let us know in the comments below! Notice anything different on omy.sg lately? We added a new section in our main navigation bar – GoSocial!…
byalvinology 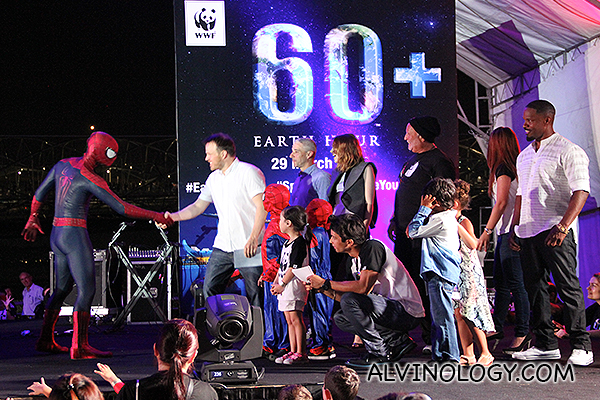