As Eden Ang’s case for sexual harassment (along with his police report about malicious comments against him) unfolds, the Singapore Police Force has finally responded to allegations that they turned away the girl accusing Eden Ang of sexual harassment.

Here is the full text of the SPF’s post:

A netizen, Kuroe Kun, posted online on 25 January 2018 that her female friend was allegedly molested. In her post, Kuroe Kun also made allegations against an Investigation Officer (IO) from Clementi Police Division. These are serious allegations against the IO, and we have looked into it. We wish to clarify that the allegations are unfounded and false. The IO carried out his duty professionally when he attended to the female friend. The IO did not make any insensitive remarks, contrary to what has been alleged by Kuroe Kun. Neither did the IO turn Kuroe Kun’s female friend away. Rather, the female friend informed the IO of her own accord that she needed time to consider about lodging a police report

Following Kuroe Kun’s online post, the Police have requested Kuroe Kun’s female friend to come forward to lodge a report. However, she has not been forthcoming in her accounts to the Police and has yet to make a police report, despite our continual efforts to reach out to her.

The Police take a very serious view of all complaints or allegations made against our officers. Such complaints will be thoroughly investigated and if substantiated, the Police will not hesitate to take action against any errant officer. However, we also cannot condone malicious allegations against the Police. If the allegations are found to be false and made maliciously, appropriate action in accordance with the law will be taken.

The Police urge members of the public to post information online responsibly. We also urge the public not to speculate or spread unsubstantiated information.

What did the police say about Kuroe Kun and her friend?

According to the post above, the SPF said that they handled Kuroe’s female friend’s complaint professionally. The police did not turn Kuroe’s friend away. They also did not make any insensitive remarks. They have categorically denied all the accusations that Kuroe had made and instead said that they asked her friend to lodge a report.

The police also said that Kuroe’s friend did not immediately file a report and wanted to think on the matter.

The police have mentioned that they will take legal action against people who wrongfully accuse against them.

Here is the original post from Kuroe (which has now been taken down):

While Kuroe has not mentioned the name of the friend she was referring to, a girl on Instagram has come forward as the person who went to the police with the story of Eden Ang’s harassment.

Who is Lilith and what is her side of the story?

Eden Ang denies everything, files his own police report

After mentioning that he has filed his own police report regarding the “malicious comments” against him, he also publishes a new Facebook post where he said that he did not take advantage of anyone

He also said that he has faith in the police and that he is going to let the usual process for these cases take its course. He thanked people for supporting him and said that sexual harassment is also a serious matter. He has mentioned that he is taking legal action in this matter.

What do you think of Eden Ang’s statement? Let us know in the comments! Gram Café and Pancakes, famous for its jiggly, Insta-worthy soufflé pancakes, is set to open in VivoCity on…
byRuth Y 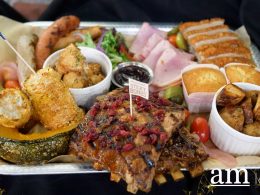 Feast Heartily; Gather Joyously with Morganfield’s for 2022 Christmas and the New Year

For meat-lovers, the year-end festive period is the time to indulge in festive roasts like ham, turkey, steak…
byalvinology
Power up your child's learning with Geniebook.
Sign up for free demo
This is default text for notification bar
Learn more