Jedi or Sith? The Star Wars Special Edition Yoga 920 from Lenovo is as good as a lightsaber when announcing your side of the Force

Whichever you choose, just make sure you’re one with the Force.

Lenovo has announced that its highly anticipated, limited edition Star Wars-themed Yoga 920 is coming to a galaxy near you.

Coming in two versions with visually striking and head-turning Gorilla® Glass covers, the Star Wars Special Edition Yoga 920 will be available in Singapore on 2 November.

A white version of the Yoga 920 features an etched logo of the Rebel Alliance, while those who want to represent the imperial forces can buy the black version etched with the emblem of the Galactic Empire.

The slim and sleek Yoga 920 series is renowned for its intricately-tooled watchband hinge, a beautiful all-metal unibody design weighing just 1.37kg, and a near edgeless 4K display, making it ideal for immersive entertainment and unparalleled productivity. In terms of its design and hardware, the Star Wars Special Edition Yoga 920 is as futuristic as it looks and sounds, featuring:

Between 15 – 28 November, 2017, 15 lucky Lenovo and Star Wars fans in Singapore will stand a chance to win a Star Wars Foldable Back Pack by taking part in an online contest.

Fans simply need to visit Lenovo Singapore’s Facebook Page and let us know which side they want to be (Rebel Alliance, or Galactic Empire) and why in no more than 25 words. They have to share their answer on Lenovo’s Facebook post with the following hashtags: #LenovoAllianceSG #StarWars #TheLastJedi #Yoga920 #DifferentIsBetter

Prices for the Star Wars Special Edition Yoga 920 starts from $SGD 2999, without shipping and taxes.

Take a look at photos of the two variants below: Netflix recently announced that Season 5 of Money Heist would be the last installment to the much-loved series,…
byAngeline Rodriguez

How to get your hands on Google Wi-Fi in Singapore

Google has launched Google Wi-Fi in Singapore, in partnership with telco operator, StarHub. We are the first country…
byStaff Writer 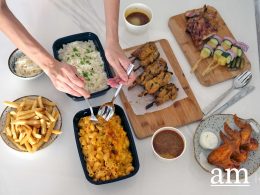 Singapore’s 56th National Day is just around the corner and grilled meat speciality restaurant, Morganfield’s, is bringing back…
byalvinology