Do you know this woman? Chelsea FC is looking for her

English professional football team Chelsea FC is looking for a woman in Singapore.

Posting on their website, the football club said one of its fans was seen wearing “some unique Blues headgear en route to the National Stadium” where the team played against Bayern Munich on Tuesday (25 July).

“If that fan is you let us know to receive a special Chelsea gift!,” it added.

The woman spotted in the photo is also seen dressed in a blue T-shirt, wearing a helmet bearing the football club’s logo.

“The bikers were displaying their true colours ahead of our game against Bayern Munich and have cleverly made extra use of their protective helmets to showcase their love of the club,” Chelsea FC said.

If you are the lucky woman or know someone who may know her, do get in touch with the club via email at [email protected].

Chelsea FC will next play against Italian professional football club Inter Milan at the National Stadium on Saturday (29 July) at 7.35pm. 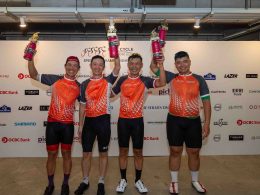 What would you do if you receive a $2 Ang Pao? In this Facebook post, a posted a…
byDanielle Ann