What does it mean to be rich in the Philippines? While you can certainly say celebrities and their kids are rich, it’s actually hard to tell when someone’s pinky finger is worth more than you’ll ever make in your entire life.

Some faces on this list are mainstays in social media and TV, but you’ll find a few more low-key (and low-class but high-rolling) “kids” on this list. Are they really rich? That’s for sure and they will give their counterparts in Singapore a run for their money.

While her status as a member of the Brunei royal family is still unclear, her real name is Karraminah Clarisse. As the daughter of Evangeline del Rosario, KC could be a Bolkiah, as her mother is married to Prince Jefri Bolkiah of Brunei. She could at worst be the half-sister of a real life princess.

While a celebrity in her own right, her name rang in the halls of show business when she could have been the reason a former PH president’s grandson broke up with his baby mama (who also hails from an affluent and influential clan).

No one can discount the beauty empire her mother built, and this little tot is testament to beautiful genes as well! The daughter of celebrity plastic surgeon and Belo Clinic owner and Doctor Hayden Kho, Scarlet Snow is a tiny princess in her own right. While you were on your bed cover at her age, she’s on the cover of Lifestyle Asia!

She’s the main model and endorser for Belo Baby (she probably inspired her family to create the line as well) and is already rubbing elbows with celebrity kids and parents.

Eldest son of Philippine Senator Ferdinand Marcos Jr. (and grandson of deceased President Ferdinand Marcos and Imelda), he rose to fame this last Philippine election in 2016. His mother is an Araneta, which means she is from one of the most wealthy and influential families in the country. He is literally the kid whose grandmother owned 2,700 pairs of designer shoes.

He graduated from City London College and is currently working in Manila. He lived most of his life in United Kingdom but now supports his father in political endeavors.

If you know Manny Pacquiao, then you know that he has five children with his wife, Jinkee, who are his pride and joy.

Emmanuel (Jimuel) Jr. 16, Michael Stephen, 15, Mary Divine Grace, 10, and Queen Elizabeth, 8 and Israel, 3 are regular features on the Pacquiao couples’ Instagram accounts, but the kids live simply. Still, it bears saying that Jimuel is a commercial model and product endorser for Bench. Mary Divine Grace could be holding a white Birkin in that photo.

They go to school in their father’s hometown, a far cry from the international school scene they used to be in. Still, their birthdays are lavish affairs at hotels.

The Lopez clan hails from Iloilo, where they made their fortune through vast swaths of sugarcane plantations. But their interests have now expanded to politics, society and philanthropy.

But what you can see from Vieo is despite his family owning the TV network he works for, he has his own thing, and works just as hard as anyone else. If he has a little more connections, well, can you fault the guy for being born into that illustrious family?

You can’t mention “wealth” in the Philippines without mentioning the Cojuangcos. Hailing from one of the oldest rich families in the country, their lands in Tarlac are old and very fertile. They have interests in rice milling, money lending and politics.

Dominique is the only daughter of actress Gretchen Barretto and her partner Tony Cojuangco. She made her debut in the ultra chic annual Bal des Débutantes or “Le Bal,”  in Paris, representing the Philippines. She also had another debut back home where A-list celebrities, starlets and prominent society figures attended.

She recently finished fashion design in London and has started her own clothing line with her first collection called “La Doña,” expertly worn by her model mom.

Nothing says rich like Instagram posts of Louis Vuitton shoes and a ride on a private jet. Jolo Estrada is the son of embattled Philippine Senator Jinggoy Estrada, who is facing raps for a million-dollar plunder suit.

His lavish lifestyle became apparent when the teen purportedly posted Instagram photos of $600 Louis Vuitton shoes and a private jet shot of him and a friend eating Cheetos. He also posted shots of the Presidential Suite in the Manila Hotel, which costs around $3000 a night for a stay.

Former PH President Joseph Estrada, defended his grandson when the photos surfaced, saying the latter had money because of show business earnings.

Well, we did say we would feature rich kids on Instagram, didn’t we? This guy is definitely rich, since he can blow money on a billboard just to ask a celebrity out for coffee. He apparently didn’t bother to pay for a graphic designer.

He also bought the same celebrity an unnamed amount of high-end makeup and posed with the receipt. The posts have since been taken down. But purchases and stalker-vibes aside, this Xian Gaza says he is the CEO of a Hong Kong company and manages his own company in the Philippines from the age of 19.

When news of the billboard went viral, Gaza’s former business partners and associates emerged to call him out for failed business deals and unpaid debts.

Granddaughter of Henry Sy (who’s responsible for putting those huge SM Malls in the Philippines and abroad), she is the daughter of Banco de Oro Chairperson and SM Investment Corporation’s head, Teresita Sy-Coson.

She currently lives in London as an artist and has regular shows. After earning her art degree is Central Saint Matins with first honors, she also studied pottery in Singapore.

Alily is the daughter of Mrs. Small Laude, whose sister was responsible for building the huge mall structures strewn all over the Philippines. Her aunt’s firm was the only firm capable of building such large projects.

As for her mother, Mrs. Small Laude was one of the first to venture into the export and import of baby designer clothing and accessories in the Philippines.

If you had any doubts about her, she’s the youngest person I’ve seen carrying a real Chanel Flap bag that goes for $7000 right now.

While other rich kids fill their IG feeds with the high life, you can see a girl with sublime taste and an artistic eye.

Sure, there are a lot of other rich kids on Instagram. You can even find photos of them here. But it’s hard to say who they are or where their money comes from, as anyone can use #richkid these days.

Indonesia has its own share of rich kids here. 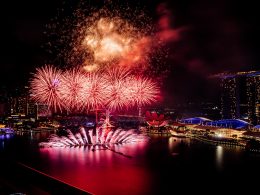 This year-end, crowd-favourite fireworks will return to illuminate the Marina Bay skyline as part of Singapore’s biggest countdown…
byIrone Kim

Here’s how to save gas: Own a Nissan LEAF – a 100% electric powertrain vehicle

Nissan announces the arrival of the new Nissan LEAF in Singapore. The sale of Nissan LEAF marks a…
byIrone Kim