Legendary musical The Sound of Music is returning to The MasterCard Theatres, Marina Bay Sands in Singapore this November, and the search is now on for 18 children to be part of the show.

The highly-acclaimed production comes from the home of West End musical theatre – the famous London Palladium – where the lavish and dazzling show celebrated a record-breaking 954 performances and was seen by over two million people.

Auditions will be held at The MasterCard Theatres, Marina Bay Sands from 26 to 28 May for two male and four female roles. Those aged between 6 to 14 are invited to register. Tickets for the show go on sale in May.

The producers are looking for 18 outstanding girls and boys from Singapore (six children cast in three rosters) to play the roles of the six younger von Trapp children: Friedrich, Louisa, Kurt, Brigitta, Marta and Gretl.

Children who wish to audition must fit the below criteria to perform in the show.

Candidates are expected to have a good level of skill in acting, singing (including part singing with harmonies) and dancing. All nationalities are very welcome.

Prospective candidates are required to complete an online form at www.soundofmusicsg.com. Candidates are also required to be physically be present at the pre-registration sessions on 22 and 23 May at The MasterCard Theatre foyer, Marina Bay Sands.

James Cundall, Producer of The Sound of Music  and Chief Executive of Lunchbox Theatrical Productions said, “For local children to have the chance to star on stage with professional actors in an international production from London’s West End will be a dream come true and the chance of a lifetime.  You never know where an opportunity such as this could take you!”

The Sound of Music tells the uplifting true story of Maria, the fun-loving governess who changes the lives of the widowed Captain von Trapp and his seven children by re-introducing them to music, culminating in the family’s escape across the Austrian mountains as tensions rise prior to the outbreak of World War II.

Some of the most memorable songs ever heard on stage and screen include My Favorite Things, Edelweiss, Do-Re-Mi, Sixteen Going on Seventeen, The Lonely Goatherd, Climb Ev’ry Mountain and the title song The Sound of Music. 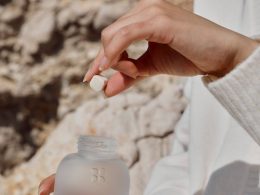 waterdrop announces its first foray into the Asian market by opening its first mall-based kiosk in Singapore. Known…
byIrone Kim