The Wonderful World of Disney On Ice is now showing in Singapore at the Singapore Indoor Stadium from 15 to 19 March. Ticketing information is available via the official Singapore Sports Hub website.

If you want to treat your little ones to some fun and entertainment during the March school holidays, this is a suitable wholesome show for the whole family. There are lots of opportunities for audience interaction throughout the show, with kids from the audience even participating in some parts of the performances: Judging from the response on the opening night, all the kids were having great fun, singing and dancing along throughout the show.

For this newest edition, there are segments featuring newer Disney characters from the Frozen (2013) and Finding Dory (2016). The former is just perfect for an ice show and is the highlight for the night. Check out this short video of Elsa, the Snow Queen, singing the theme song:

The first half of the show featured an opening segment from the Lion King, followed by a medley of Disney princess performances from Snow White to Prince Jasmine (from Aladdin) to Rapunzel to Ariel the Little Mermaid. For adults, it’s a walk down memory lane as familiar Disney theme songs played, one after another, complemented by the poise and grace of the ice skaters.

After the intermission, there were three longer segments from Toy Story, Finding Dory and of course, Frozen.

Disney’s iconic characters, Mickey, Minnie, Donald and Goofy acted as hosts for the show, bridging each of the segments with their humorous banters and antics. 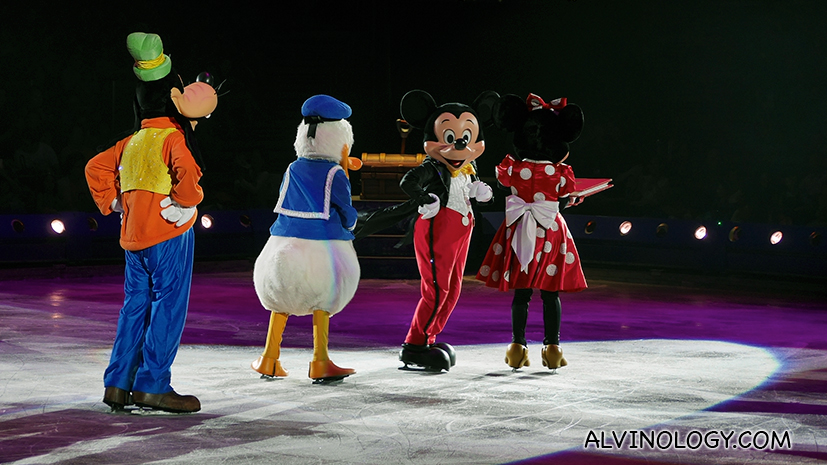 I saw many little kids dressed as Disney characters specially for the show. I lost count of how many Elsa and Anna I saw. These two characters from Frozen are easily the most popular ones and you can judge from the thunderous cheers and applauses they received when these two characters made their appearances.

A few weeks earlier, my son Asher had the opportunity to meet the cast of the show and learned some ice skating beginners’ tips from them:

The cast members of The Wonderful World Of Disney on Ice shared some of their magic with Asher and other kids in a one-of-a-kind skating clinic at The Rink at JCube! They also showed off some of their rad moves, which you’ll be seeing when they take to the stage from 15-19 March for 10 performances at the Singapore Indoor Stadium. Tickets starting at $25 from www.sportshubtix.sg @DisneyOnIceSEA #DisneyOnIce

This edition of the show is produced by Feld Entertainment, a worldwide leader in producing and presenting live touring family entertainment experiences such as Disney On Ice and Disney Live!. Ticket prices start from S$20 to S$200 for the Magical Moment Package which a rinkside first row seat, priority entrance access, crowd-free merchandise shopping opportunity, VIP lanyard and poster as well as post-show meet and greet.

Children under the age of 2 can enter for free with a paying adult in a shared seat. All children above 2 must purchase a ticket and those under 12 must be accompanied by an adult. Outside food and drinks are not allowed in the theatre, including personal water bottles. There is also a short intermission in-between, but no re-entry is allowed if you leave the premise.

“Are you French?” I asked the guest relations girl. “Oh yes!” she beamed. “How did you know? Was…
byKatherine Goh Legoland Malaysia Resort has recently opened Ninjagotm themed rooms at its resort, the first of its kind in Asia. Budding…
byChitra Kumar