Have you heard of Mohd Faiz Subri?

This footballer from Malaysia just propelled Malaysian football to the world stage by grabbing the FIFA Puskas award for goal of the year at the 2016 FIFA Football Awards in Zurich, Switzerland, on 9 January, 2017.

He became the first Asian player to claim the glorious prize, and would rub shoulders with the international football stars like Cristiano Ronaldo and Sir Alex Ferguson.

You may not be familiar with his name, but football fans might have seen his winning goal video online when it went viral last year. Here are five facts about Faiz which avid football fans should get to know.

You have to watch Faiz’s winning goal yourself if you haven’t seen it to be totally wowed by his physics-defying free kick in a Malaysia Super League game last February. The video of his goal went crazy viral on social media channels like Facebook and YouTube, captivating viewers from around the world.

Faiz’s award-winning goal was the second goal he scored in Penang’s 4-1 victory over Pahang on 16 February, 2016. Faiz plays as an attacking midfielder for Malaysia Super League club Penang FA.

Faiz was originally from Kedah

He played for the Kedah youth squad from 2006 to 2009, switching to play for Perlis club side KSK Tambun Tulang in the 2009 FAM Cup league, and also represented Perlis in Piala Emas Raja-Raja 2009. He moved to play with Perlis in early 2010.

Faiz subsequently signed one-year contract with T-Team in 2012 season. In 2013, Faiz left T-Team and signed a contract with Malaysia Super League top club, Kelantan. A year later he joined Terengganu FA, and in 2015 he changed clubs again as he dropped a division to join Penang FA.

Tunku Ismail Sultan Ibrahim, the Crown Prince of Johor is a fan of Faiz

Faiz has over 75,000 fans on his Instagram and has a large fanbase in Malaysia. When rallying for votes for the Puskas award, even the Crown Prince of Johor, a football fanatic, chipped in his effort for Faiz:

Faiz was recalled to the Malaysia national team in 2015

Faiz was first called up to the Malaysia national football team in 2012 and 2013 under K. Rajagopal, but he never made any appearance in either call-ups. After strong performance in 2015 with his team Penang FA, he was recalled to the national team in August 2015 under coach Dollah Salleh.

At the award ceremony last night, Faiz looked sharp, dressed in a black tuxedo and a neat bow tie. “Honestly, it never crossed my mind that I would be able to stand here for the best, world-class goal of 2016,” said Faiz in his acceptance speech.

“I would like to thank the Penang Football Association, the Professional Footballers Association Malaysia, FAM, my family, my father, my mother, and everyone who voted for me.”

Thanks for putting Asian football on the world stage! 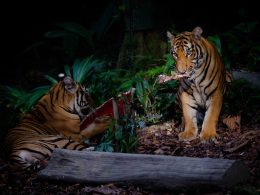 Singapore’s Wildlife Parks spotlights Malayan tigers along with lots of enrichment activities this Lunar New Year! Check them out here – In a report by the Straits Times, two Singaporeans have been arrested and convicted for crossdressing in Abu…
byStaff Writer

Are you a fan of IMAX movies? The good folks at Shaw cinemas have put together a list…
byalvinology