On the last day of May, I had had the privilege to be part of a chef’s table organised by the Singapore Chef’s Association along with a panel of five heavyweight chefs, which includes Bruno Menard (most of you might be familiar with his burger joint at Pacific Plaza, &MADE); Julien Royer of JAAN at Swissotel; formerly The St. Regis Singapore’s executive chef, Frederic Colin now owner of Brasserie Gavroche; the president of Bocuse d’Or Singapore, Christophe Megel and Stephane Istel, ‎the Executive Chef and Co-Owner Bar-Roque Grill, where the lunch was held.

The chef’s table was an initiative meant to raise funds to field the Singapore representative to the Bocuse d’Or Asia 2014.

Let me first give you a quick backgrounder of B’ocuse d’Or and why it is so important in a budding chef’s career.

The Bocuse d’Or is named after 3-Michelin star chef Paul Bocuse. Conceived in 1987, the prestigious international competition has chefs preparing a meat and fish dish over five and a half hours. Working with pre-determined core ingredients, chefs have a free hand with the preparation method and accompanying side dishes and sauces.

In 2012, the Singapore representative for Bocuse d’Or, Chef Yew Eng Tong (chef de cuisine, Ocean restaurant at Resorts World Sentosa) made history when he emerged champion at the Bocuse d’Or Asia selection. He is, once again, returning to compete in the same competition this month on the 26th and 27th in Shanghai.

At the Chef’s table luncheon held at Bar-Roque Grill on 31st May, the 5 chefs of gravitas together with the Bocuse d’Or competitor, his coach (Khoo Wee Bin), his assistant (Aaron Wong) and the President of Bocuse d’Or Singapore (Christophe Megel), presented a 5-course luncheon, paired with wines sponsored by the Primum Familiae Vini ‘The Leading Wine Families’. The lunch was priced at SGD$1,000 per person, which effectively made it the most expensive meal I have ever had in my entire life! You can only imagine how honoured I am — thanks to Jenny Tan and her team of FoodCult.

It was a decadent meal to have on a Saturday noon to say the least. Here is a preview of some of the best dishes from the spread I was treated to:

According to the host and co-owner of Bar-Roque Grill, Kori Millar, the NZ abalone that was used in the first dish is a rare commodity. So rare that it is not for sale. Named “baua” by the natives, these white abalone are wild and are harvested in batches of 20 pieces a week only. They are not sold in markets and can only be ‘traded’ with a select group of people who have been “handpicked” by the natives. Talk about something that money cannot buy.

There were two other dishes which were made by Chef Yew which no one could release any form of information on (including photos, the dish’s name and so on) prior to the competition for fear that the idea might get hijacked and stolen by fellow competitors.

I’ve had the opportunity to interview Chef Yew, so I asked what was the inspiration behind the dishes that he whipped up to enter for the competition. This was what he had to say:

“For both the dishes that I did, it was a push for myself out of the familiar comfort zone. For the first dish on the menu, the mentors encouraged me not to be afraid to try a different pairing for this oily fish. Instead of pairing it with something citrus, like most seafood dishes, we experimented with an accompaniment that was more unique and associated with meats. As daunting a challenge this was, I am glad I took the gamble, as executing this dish well would mean being able to score more points during the judging.”

According to Chef Megel, the judges at Bocuse d’Or critique the participants’ dishes based on 3 key criteria: composition of the dish (how many types and what are the ingredients used); complexity of the dish (a test of the chef’s skillls and culinary techniques) as well as taste (which forms the largest component of the total score and it needs to reflect the flavour in which the country the chef represents, originality and presentation).

I then asked Chef Yew, if he won, what would be the first thing he’ll do. His response?

“If I won this round of selections for Asia Pacific, it will be really awesome! I would celebrate with my team and our mentor chefs, before more hard work begins with the preparations for the competition in Lyon. I definitely want to do better than last year and move up many spots from number 17th. I guess my celebration will definitely include the opening of the 1978 Glenrothes Single Malt Whiskey sponsored by Beam Global. This particular year of the whiskey is especially significant to me since it is my birth year and it also coincides with one of our mentor chef, Chef Stephane Istel’s birth year as well. I am looking forward to opening that bottle of whiskey soon!”

On behalf of everyone here at Alvinology.com, our heartiest best wishes to Chef Yew and we hope he makes Singapore proud again and prove that our tiny red dot is not small on culinary talent.

Till the next Bocuse D’or! 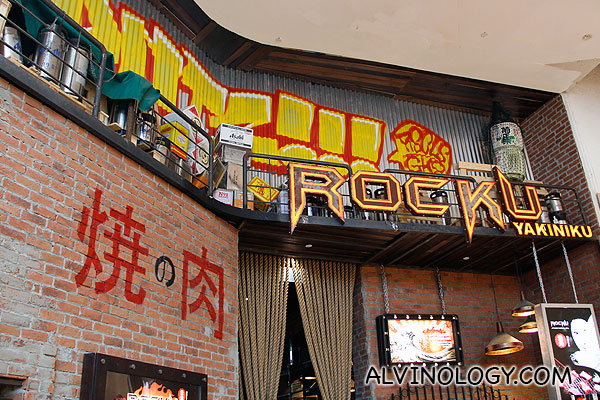 Located in Bugis+, ROCKU Yakiniku is a casual, upbeat and edgy Yakiniku (Japanese charcoal grill) restaurant under the…
byalvinology

Don’t be a Cheapskate