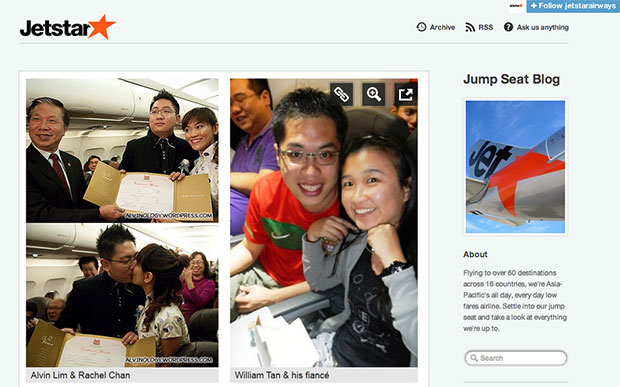 Rachel and I have been married for four years and my 4th anniversary went by over the Chinese New Year period on 2 February 2014.

Our plane solemnisation story was revisited on Jetstar’s Jump Seat Blog recently. Here is the extract:

Singapore Book of Records – First Wedding on Board an Airplane

Alvin Lim and Rachel Chan exchanged their wedding vows on board Jetstar Asia’s inaugural flight from Singapore to Shantou on 2 February 2010. Happily married for four years now, the couple has a boy named Asher Lim who will turn three years old in August.

“Have we been married for that long already? Being solemnised on board an airplane in Changi Airport has been quite an experience and remains a very unique and memorable milestone in our lives. Even till today, whenever we have to produce our marriage certificate to others, the venue of the wedding solemnisation which is stated in the certificate, never fails to surprise them and our friends and relatives are still talking about it as if it happened only yesterday!”
– Alvin & Rachel, on how they felt about the wedding solemnisation

“The stars were definitely aligned! My mum is a Teochew and so were my bosses, one of whom was our wedding solemniser, and they are members of the Teochew Poit Ip Huay Kuan which chartered Jetstar’s inaugural flight to Shantou, home to many of the Teochew descendants in Singapore. When the idea was first mooted, they thought the wedding would bring an auspicious start to the Singapore – Shantou service too and one thing led to another and we got married on board the plane! We were shocked by the huge media turnout and coverage too, so well done to the Jetstar PR team!”
– Alvin & Rachel, on why they wanted to get married on board Jetstar’s flight

“Whether it’s Valentine’s Day or Yuanxiao festival, we don’t really celebrate as every day is a special day for us. But we did go for a good family dinner at a Korean restaurant on our fourth wedding anniversary on 2 February this year together with our boy.”
– Alvin & Rachel, on how they will be spending Valentine’s Day

Read more about the wedding solemnisation on Alvin’s blog and also watch the video:

Low Wei Jie, 12, from Compassvale Primary, has become a national celebrity of sort recently for his relentless…
byalvinology

Hej! As I was preparing for my recent trip to Denmark and Sweden, I realized that I was…
byAlex Liang

In a report that has many parents shocked and fearful, a 5-year-old boy was assaulted by a man…
byDanielle Ann