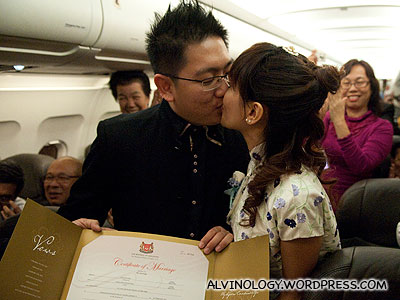 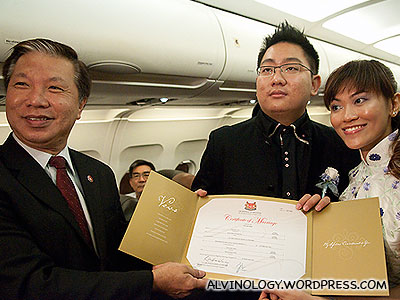 Rachel and I are the first couple in Singapore to have our solemnisation ceremony on board an airplane. It happened at 5.50am on 2 February, 2010, on board Jetstar’s plane, 3K 823 at Changi Airport, Terminal 1.

You can read more about the process from the blog entries below:

Alvinology in the Singapore Book of Records: First Wedding On Board An Airplane

Getting married in less than 6 hours

Rachel and I were overwhelmed by the media interviews and well-wishes from the other passengers, friends and family members, on board the plane.

It was not easy making this happen due to all the logistics, scheduling and technical details involved.

Rachel and I would like to thank all the following people for making this possible – our family members, especially our moms for being our witnesses, my mom again for making Rachel’s beautiful cheong sam which she wore on the day, Rachel’s sister, Eunice for the wonderful photos, my uncle for rushing down the airport with the rings at 5am in the morning, my sister, Xinyi who searched for the ring at 4.40am in the morning; the Jetstar team, especially Ms Chong Phit Lian, for giving the go ahead, Chiat Ying, Simone and Peter for their assistance through the ceremony; our wedding solemniser, Mr Lim Huan Chiang; my omy colleagues, Han Joo and Ming Cai for waking up so early in the morning to cover the event, my bosses, Mr Chua Chim Kang and Ms Lee Kuan Fung for their support; all our media friends present on the day or who covered the ceremony, Nicholas, Jin Xiang, the RazorTV team; the entire Teochew Poit Ip Huay Kuan contingent who were on the plane with us, including the Chairman, Mr  Goh Nam Siang and Member of Parliament for Aljunied GRC, Madam Cynthia Phua; the Meritus team, Elaine and Chitty, as well as Rita from Wotif Group for the hotel arrangement; all our other wonderful friends, family members, strangers at the airport, readers of this blog, everyone else who sent your well-wishes to us in one way or another.

A big THANK YOU from both of Rachel and I. 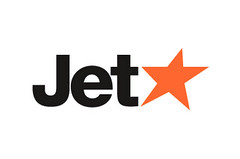 Power up your child's learning with Geniebook.
Sign up for free demo
This is default text for notification bar
Learn more