While you can count on almost every popular fast food chain restaurant in Singapore (with the exception of Mos Burger) being halal certified these days, it wasn’t like so back in 1990.

Yes, in those days, even McDonald’s was haram (opposite of halal). The only fast food restaurant to earn its halal certification then was Arnold’s Fried Chicken, a homegrown brand. 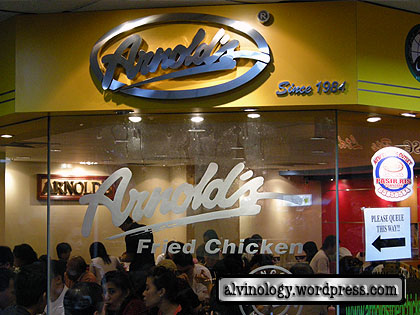 I chanced upon this nugget of information the day I discovered Arnold’s on the second level at City Plaza. Even though it was tucked away in a corner, the strong whiff of fried chicken was impossible to miss, much less the early-dinner queue that had already begun to form outside its 50-seater establishment (rough estimation) at 5.30pm. 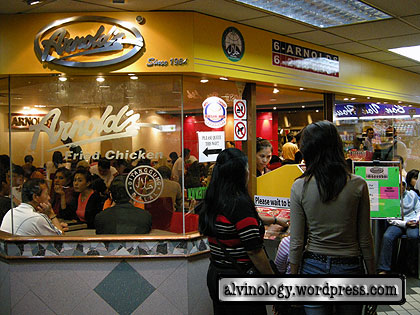 How clever of Arnold’s founder to have quickly caught onto the gaping need for halal fast food, and chosen City Plaza as the location for his flagship restaurant. 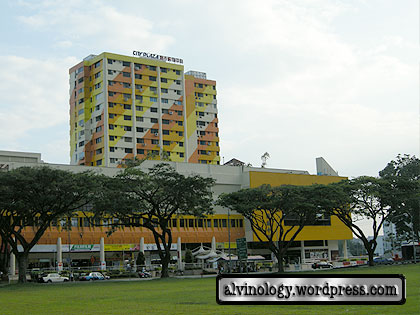 The main dish – deep fried chicken – does not disappoint. The meat falls cleanly from the bone, even at thick parts like the breast and thigh. The meat is moist and tender, the crispy skin flavourful and just spicy enough. Unlike a certain longstanding fried chicken joint, you won’t see bloody meat when tearing apart a piece of Arnold’s fried chicken. 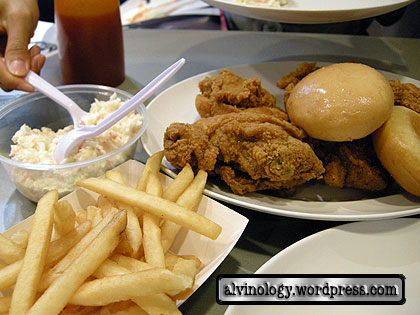 I was pleasantly surprised that the staff in charge of allocating queue numbers at the door is also tasked to take down orders, so that the customers’ food is served promptly when they are seated. One can request a maximum of two desired chicken parts.

On top of the normal KFC-ish fare, a couple of Arnold’s side orders are unique to itself: squid rings and natural chips. I didn’t have the opportunity to try either, but noticed that the the Potato Platter (consisting of criss-cut fries, wedges and natural chips with cheese sauce) was quite popular amongst its regulars. 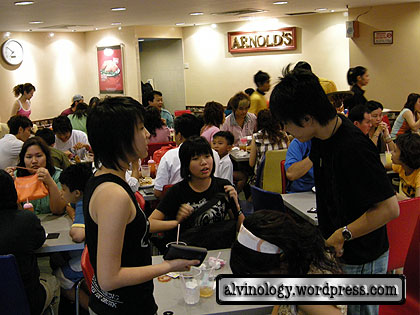 I have one gripe: customers cannot customise their set meal by changing the side dishes. There was no incentive to order more side dishes on top of the already bulky meal. Also, word of advice: drink a cup of hot Chinese tea if you want to dispel the bloatedness after the oily meal. 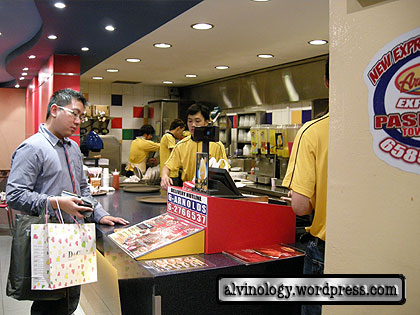 Eat first, then pay after

Next time, I am going to try their natural chips and spring chicken. Thank goodness that, on top of Popeye’s, there’s something better than KFC.

Arnold’s has another branch at Pasir Ris Town Park and also offers home delivery service. Check out their website for more details.

In a special collaboration with eight well-known restaurants, omy.sg and Lianhe Wanbao, together with veterian food critic Ah…
byalvinology 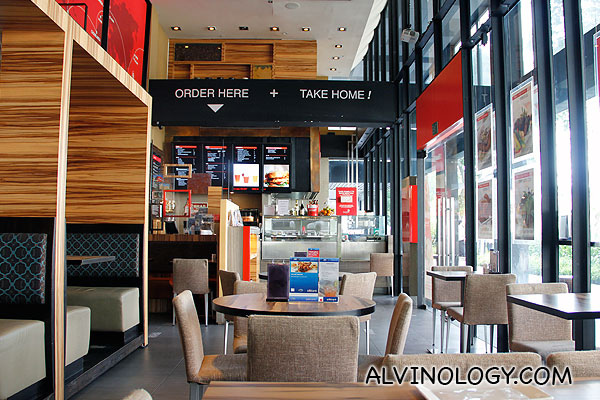 I had a very pleasant brunch last Saturday (4 May) with my son, Asher at Charly T’s at…
byalvinology

WTH is this lame looking crap? This poster has been spotted at Potong Pasir MRT Station more than…
byalvinology

Founded in 1919, Killiney Kopitiam is the oldest Hainanese coffeeshop in Singapore. Today, Killiney is known as a…
byJune Tan