If you use your mobile phone to play lots of hardware-demanding mobile games like Genshin Impact and PUBG, here is the perfect gaming phone for you at a reasonable price – the new Black Shark 5 Pro.

An upgraded version of the Black Shark 4 Pro, one of the most innovative features carried over from the previous model is a pair of magnetic pop-up triggers at the side of the body.

By gently flicking two side-mounted buttons, the magnetic pop-up triggers will appear, giving you responsive and satisfying tactile control for your gaming needs. With these triggers, there is no need to purchase gaming controller conversion devices like Gamevice for a better gaming experience on your mobile.

After that, just game away to your heart’s delight:

All the Great Stuff

The triggers can also be used for other functions such as turning on and off the flashlight, freeing up RAM, recording audio, taking screenshots, screen recording and more. A slight drawback from the previous model, whereby the trigger buttons were too sensitive and can be easily activated accidentally when you pull the phone out of your pocket, has been fixed.

Performance-wise, the Black Shark 4 Pro passes with flying colours, given that performance power is its main selling point. The gaming phone is able to run top-end mobile game titles to their highest graphics settings, without any sweat. This is thanks to the Snapdragon 8 Gen 1 processor it is running on, supported by up to 12GB of RAM. Collectively, this gives you the best-in-class technical specifications for a gaming phone.

The 4 Pro comes with a pre-installed Shark Space app for serious gamers. it will scan your phone and capture all the gaming apps you have on your mobile, loading them quickly when you launch the app. When you are playing your game in the Shark Space app, all other notifications and disturbances will be turned off till you long press a screen button to leave Shark Space. Nifty for those who wants unterrupted gameplays.

Shark Chan, the Black Shark equivalent of your Siri on iPhones, but with anime characterisation, is also back as your virtual aasistant from 4 Pro.

The angular rear camera unit looks sharp and there is an elongated diamond-shaped LED indicator beneath it which is used to signal incoming calls, notifications and other prompts. Black Shark allows your to customise the colour, pacing and behaviour of the LED in the settings. These features are more for aesthetic than functional, but they up the cool factor of the Black Shark 5 Pro as a gaming phone, just like its predecessor.

The phone is a conversation start due to its unique aesthetic designs.

In order to deliver the highest performance power for gaming, there are some compromises for the Black Shark 5 Pro.

For one, the battery life for the Black Shark Pro 5 is not fantastic. It drains rapidly throughout the day, with a tendency to get relatively hot at times. A single charge can last for about a one full day or average usage. However, this is mitigated with its 120W fast charging feature, giving the Pro 5 the ability to power up in just 15 minutes.

For those who like to game with a plugged-in audio set, the 5 Pro is missing the 3.5mm jack for wired audio which is available on the 4 Pro. However, you can still buy a USB-C adapter to convert with the remaining port. To be fair, with the rising popularity of wireless audio gears, most smartphones are eliminating wired audio jacks.

While most people who choose a gaming phone would not have gotten it for its camera features, this upgrade will still please many as the camera features are hygiene features in any smartphones these days.

Now, at least the Black Shark 5 Pro is able to take pretty decent photos and videos, on par with most other phone models in its price range.

For the hardcore mobile gamers, you can also purchase a Black Shark Magnetic Cooler add-on to prevent your phone from overheating during long hours of extreme gameplay.

The cooler weighs 73g and is well-designed to look like an object from a sci-fi movie. You attach it to the back of your Black Shark 4 Pro phone with a piece of an adhesive magnetic sheet which you can then stick the cooler on and off easily.

The Black Shark 5 Pro is available in two colours, Nebula White and Stellar Black. The recommended retail price starts from $729 and up to $829, still much cheaper than its other gaming phone competitors. Details. 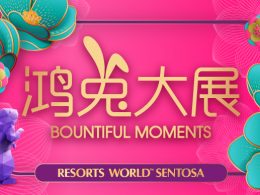 Resorts World Sentosa readies to celebrate the Year of the Rabbit with over 80 life-sized rabbit sculptures for photo opportunities! PICO officially launched the PICO 4 in Singapore, following its global reveal in September this year. The device…
byIrone Kim
Power up your child's learning with Geniebook.
Sign up for free demo
This is default text for notification bar
Learn more