Quench your thirst with the new space-inspired Coca-Cola Starshine; now available in Singapore!

Along with Thailand and Malaysia, Singapore is one of the first markets globally and in Asia Pacific to try out the latest creation by the beverage brand. Coca-Cola Creations uses the iconic Coca-Cola trademark and lends it to new expressions, driven by collaboration, creativity, and cultural connections.

The first product to launch under Coca-Cola Creations is Coca-Cola Starshine also known as Coca-Cola Starlight in some regions. Thirty plus years after Coca-Cola went to space, Coca-Cola Starshine brings the inspiration back to earth through a simple sip. It is created with the vision that – in a world of infinite possibilities – somewhere in our universe, another kind of Coca-Cola product, another way of connecting with each other, might exist.

Coca-Cola Starshine combines the great Coca-Cola taste with a dash of the unexpected, including the reddish hue of the liquid. Its taste includes additional notes reminiscent of stargazing around a campfire that evokes the feeling of a journey to space.

Coca-Cola Starshine offers a unique packaging design featuring a multi-dimensional light-filled star field and will be supported by a digital-first marketing campaign, including a partnership with global popstar, Ava Max.

The campaign is led by an out-of-this-world augmented reality (AR) “Concert on a Coca-Cola” experience that can be accessed here or by scanning a Coca-Cola Starshine can or bottle.

Coca-Cola Creations was developed under the new ‘Real Magic’ brand platform that was revealed in late 2021. 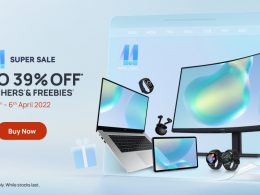 [PROMO] Don’t miss your chance to own your dream Huawei device this 4 April; up to 39% OFF plus Vouchers and Freebies!

With Huawei’s 4.4 Sale just around the corner, the brand is excited to share attractive deals starting at…
byIrone Kim

Belvoir Fruit Farms – where summer is put inside bottles

Finally, a flavoured sparkling drink which tastes exactly like the fruits and flowers its manufacturer put on the…
byRachel Chan
Power up your child's learning with Geniebook.
Sign up for free demo
This is default text for notification bar
Learn more